Wrist spin gets the win 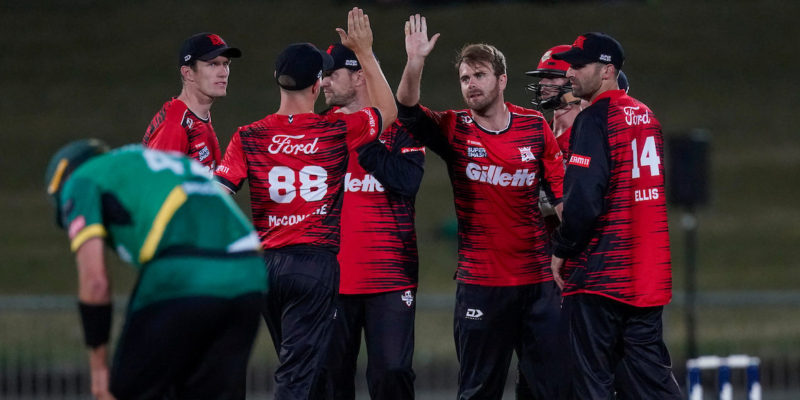 An outstanding spell of left-arm wrist spin by Blake Coburn earned the Canterbury Kings their first win of the Dream11 Super Smash season, by 30 runs over the Central Stags.

On a night where the slower bowlers thrived, Coburn shone the brightest, finishing with figures of 4-17 off his four overs. Operating through the middle stages of the Stags chase, Coburn dismissed four of the Stags’ dangerous top five batters to lead the Kings to a comfortable defence of 164-8.

The Stags tail fell away chasing a miracle and the defending champions limped through to 134-9.

Opting to bat first at McLean Park, the Kings began steadily, getting to 50 for the loss of one at a good clip.

Ajaz Patel entered the attack in the 6th over and made an immediate impact on a track well suited to his craft. He dismissed Stephen Murdoch and the free-flowing Chad Bowes (28 off 17) with successive deliveries and reduced the Kings to 50-3 after the batting powerplay.

Kings skipper Cole McConchie was joined by Cam Fletcher and the pair put on 38 in good time to have the Kings well placed at the midpoint of their innings.

The top wicket-taker so far this season, Ajaz Patel (3-23) bowled Fletcher to make the score 88-4. At the other end, Kieran Noema-Barnett also produced another excellent spell, taking two quick wickets which left the Kings six down entering their final four overs. His third wicket, a catch to Patel off the final ball of the innings gave him figures of 3-19.

The Stags started well in reply with Dane Cleaver (22) and then George Worker (21) finding some fluency.

When Coburn dismissed Worker via a superb catch to Will Williams at point, the Kings had a chance to apply scoreboard pressure with the required run-rate in excess of nine.

Timing continued to be hard to find and the Stags soon needed twelve an over. Noema-Barnett (6) fell trying to clear the fence and Coburn’s outstanding spell was complete.

When Josh Clarkson was bowled by Ellis for 8, the score was 84-6 and the Stags were out of the hunt.

With the win, the Kings moved off the bottom of the ladder and into fourth. The Stags remain on top of the table, having tasted defeat for the first time this season.