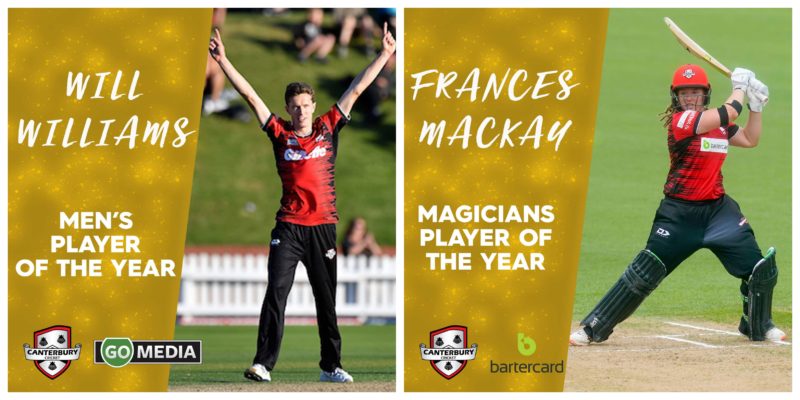 Will Williams and Frankie Mackay have each claimed a hat-trick at the Canterbury Cricket Awards picking up 3 awards a piece including the coveted Player of Year Award for the 2019/20 season.

It’s the first time Williams has won the accolade while Mackay etches her name further into Canterbury’s record books, winning the award for a 5th time.

Chad Bowes was named Batsman of the Year for the men, while Jacinta Savage and Gabby Sullivan shared the MAGICIANS Bowler of the Year award after it was too close to divide the pair.

With an aggregate of 994 runs across all formats, Chad had his most successful batting season for Canterbury in recent years. His dominance in white ball formats (786 runs) ranked him in the top five run scorers in the Dream11 Super Smash and Ford Trophy. Chad twice improved his highest T20 score, firstly smashing 90 (42) against Auckland at Eden Park and then bettering it a week later with 95 (50) against Otago at Hagley Oval. Chad then registered his highest List A score with 114* (104) against Central Districts in the Ford Trophy.

MAGICIANS Bowler of the Year | JACINTA SAVAGE AND GABBY SULLIVAN

With exactly 22 wickets each across both formats, Jacinta and Gabby both enjoyed their most productive seasons for Canterbury with the ball. Jacinta and Gabby both took 12 wickets in the Dream11 Super Smash (which is 2nd= highest amount of wickets in a season for Canterbury) and 10 wickets a piece in the Hallyburton Johnstone Shield. During the T20 campaign, Jacinta took 4-26 vs Auckland at Hagley Oval which is 1st= for most wickets in an innings for Canterbury and Gabby took only the the second ever hat rick for Canterbury against a star-studded Wellington Blaze side at Hagley Oval. Jacinta ended up 9th and Gabby 10th in the top wicket takers list for the Dream11 Super smash and 9th (Gabby) and 11th (Jacinta) in the Hallyburton Johnstone Shield.

Bowler of the Year | WILL WILLIAMS

With 40 wickets across all campaigns, Will enjoyed his most consistent season in Canterbury colours. The medium pacers highlights included his match winning 5/12 against Wellington in the Dream11 Super Smash (including a hat-trick) – the third best bowling figures by a Canterbury bowler in T20 cricket. 17 wickets at 26 in the Plunket Shield ranked him inside the competitions top 10 bowlers. His 4/52 against ND at Seddon Park was his best return in the four day format.

These awards go to those who show respect for all players & officials involved in the game. They demonstrate outstanding sportsmanship qualities and have an exceptional work ethic. They have a ‘team first attitude’ and wear the Canterbury colours with pride. The winner is chosen by a voting system whereby all players vote for their top 3 players after each match.

Frankie has had another superb year with the bat and ball for Canterbury especially in the 50 over format. Her consistency with bat and ball throughout the season despite not being 100% fit at times has been truly impressive. Her 569 runs at an average of 94.83 and 13 wickets at an average of 16.69 was an outstanding return from the Canterbury captain and this combined with her Dream 11 Super Smash contributions of 298 runs at 28.71 and 7 wickets at 28.71 has led to her being awarded with the Canterbury MAGICIANS top award.

Men’s Player of the Year | WILL WILLIAMS

Will has been at his consistent best this season and has been rewarded with the provinces top award. The standout feature of Will’s season has been his impressive accuracy and partnership bowling abilities that have undone some of the best batsmen in the domestic competitions. It has led to 40 wickets during the summer, but importantly, contributed to winning matches. Will’s unheralded approach to his training has been the key to his success.

U17 Men Bowler of the Year | OLLIE CURTIS

U17 Men Batsman of the Year | KALHAN CHALLU

U19 Men Bowler of the Year | WILL SMITH

U19 Men Batsman of the Year | MATT BOYLE

U19 Women Bowler of the Year | TATIANA GIBBS

U19 Women’s Batsman of the Year | HARRIET GRAHAM