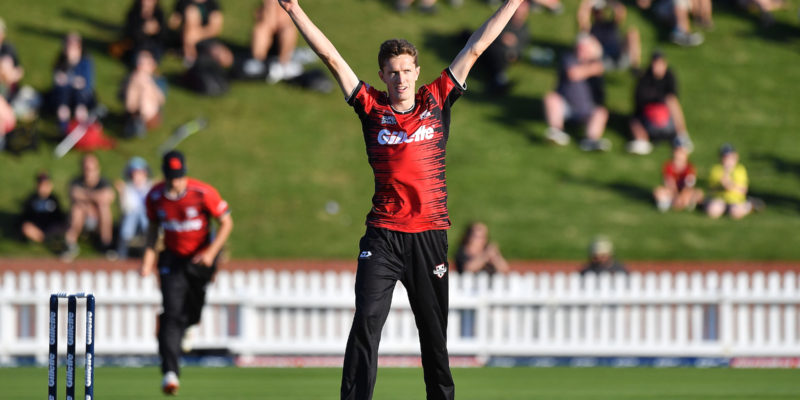 Canterbury KINGS bowler Will Williams took five late wickets including a dramatic hat-trick to snatch a memorable 3-run victory over the Wellington Firebirds at the Basin Reserve.

The Firebirds were well in control in their chase of 149 courtesy of another half-century to the in-form Devon Conway (51 off 39) and a handy contribution from Fraser Colson (37 off 29).

When Williams entered the attack in the 18th over the Firebirds needed just 24 to win off 18 balls with six wickets in hand.

He turned the match in spectacular fashion with a two-over spell. After taking a hat-trick in his first over, Williams closed out the match with wickets off the last two balls of the innings to finish with 5-12.

First, Williams bowled Fraser Colson, then had Lauchie Johns caught at long on without scoring. He completed his hat-trick with a one-handed caught and bowled to dismiss Jamie Gibson for 13.

Now seven down, the Firebirds needed 12 off the last over, bowled by Williams. Eight runs came from the first four balls and the Firebirds required four from two for victory.

But Peter Younghusband and Logan van Beek were both dismissed in search of a match-winning boundary and the KINGS grabbed a crucial victory.

Batting first, the KINGS’ 148-8 seemed below par against a batting lineup in good touch. Opener Jack Boyle top-scored with 46 off 38 as the visitors struggled for fluency throughout their innings.

The win is the third of the season for the KINGS who are still in the mix for a spot in the finals with matches against the Knights and Otago Volts to come.