Williams does it again at the death 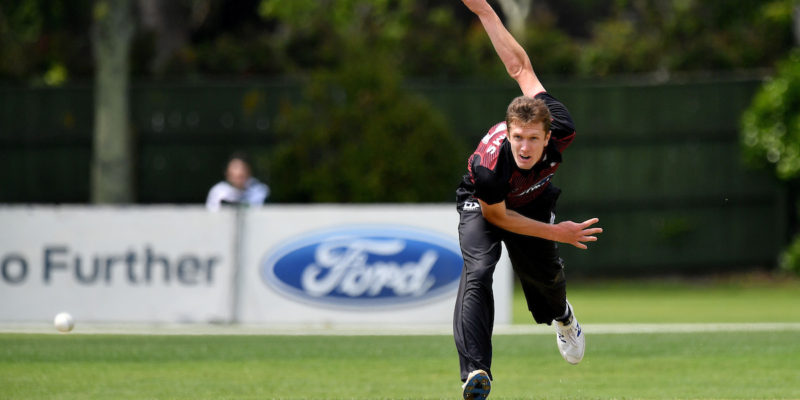 At a hot, parched Colin Maiden Park where the wicket block sat like a green oasis in the midst of Sahara-coloured oval, Henry Nicholls feasted on the conditions to slam a run-a-ball century against hosts the Auckland Aces – and every one of those runs would prove vital in a thriller that boiled down to the very last ball.

Nicholls found the rope 15 times in his 120, helping set up a Canterbury tally of 332 for six after captain Andrew Ellis (stepping in with regular skipper Cole McConchie, away with the New Zealand A side) had won the toss and batted.

After a 76-run opening stand with Chad Bowes (31), Nicholls lost his batting partner in the 13th over to a blistering grab by Ben Lister and, while Aces rookie Louis Delport soon had dangerous Jack Boyle in his wickets column as well, Nicholls made sure it turned into a long, hot couple of hours in the field for the hosts in the big top of the table clash.

From 107 for two, Nicholls and Stephen Murdoch (83 off 65 balls, included eight boundaries and two sixes) steered Canterbury into the 42nd over, having raised the red and black 250 with their 149-run stand, a new third-wicket record for Canterbury against the Aces.

It was Danru Ferns who eventually prised them apart, Nicholls departing caught after Finn Allen got under a steepler.

The Aces attack fought back at the death, but Canterbury’s Ellis and an unbeaten Cam Fletcher only added to the home side’s frustrating day with their quick late runs as the visitors looked to capitalise in the last 10 overs against a flagging attack.

Jeet Raval’s 60 at better than run-a-ball ensured the Aces got away to a good reply, despite losing three wickets – including Raval, at 111/3 – inside the first 18 overs.

Robbie O’Donnell helped stabilise the innings at five, however, sharing a vital 62-run stand for the sixth wicket with Ben Horne.

With the Aces’ 200 in sight, O’Donnell got too adventurous as he looked to reverse sweep Theo van Woerkom, bowled for his trouble on 43.

Horne quickly found late support in Matt McEwan (a run-a-ball 37) as he cracked away en route to a maiden List A and Ford Trophy century – by which time the match was in the penultimate over and boiling down to a thriller.

The keeper-batsman played it superbly for his breakthrough ton on a serious day’s work, easily exceeding his previous career best of 63 as he reached his three figures off just 70 balls, including nine fours and two sixes.

The job wasn’t done, however, even after having taken 10 runs, with competent number 11 Ben Lister, off Andrew Ellis’s last over, the 49th.

Will Williams now took the ball looking to stop the Aces’ last pair from grabbing the eight runs they needed off the 50th.

Lister clipped a single first ball to turn the strike over to Horne, who immediately turned the strike back over to his partner before Williams dotted down with his third pressure delivery.

With two balls left, the Aces needed five from two, Horne with the strike on 101*.

Williams stopped him from scoring: now Horne was left requiring a six off the last ball to win, or four to tie.

Horne had no option but to go for it, and went for his favoured sweep shot – only to hear the ball crashing through onto his stumps.

Big Bill closes out another tight one as Canterbury get home by 4 runs.

Bowled on the last ball, Canterbury snaring a thrilling win to draw level with the Aces on the points table, and a whole raft of bittersweet emotions for the first-time centurion to process as the teams made their way off the sweltering arena.