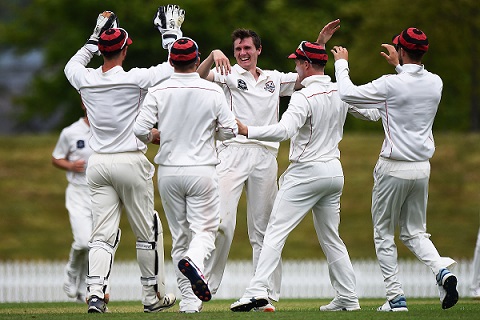 Canterbury beat the Wellington Firebirds by an innings and 134 runs.

Plunket Shield interim leaders the Wellington Firebirds have flown away from Rangiora with just four points after having been crushed by a weight of red and black runs – with defending champions the Central Stags now capable of overtaking them at the top of the table in this round, and Canterbury having gained valuable ground on the ladder.

Canterbury wrapped up an innings victory before lunch on the final day after the last six Firebirds wickets tumbled in quick succession, each of the five-strong Canterbury attack finishing with two wickets.

Three wickets in the last three overs of the day – for no further addition to the score, while they were still trailing their hosts by 176 was the last thing the Firebirds needed after another long, sweaty day chasing leather.

Canterbury batsman Ken McClure already had a first-class double century to his name, but his 152 – an innings continuing overnight from his fourth first-class century – was upstaged by teammate Leo Carter’s career-best unbeaten 226*.

Carter’s impressive feat was the seventh highest first-class performance for Canterbury in its lengthy history, and, just two runs shy of surpassing Shanan Stewart’s 227 not out of the runfest 2009/10 summer.

Canterbury declare on 570/8 meaning this special innings by @leo_carter_ comes to an end. Previous high score was 101! #WeAreCanterbury #CricketNation #PlunketShield

McClure and Carter combined for a mammoth 221-run stand for the fourth wicket, followed by a further century stand (116) between Carter and Cam Fletcher for the fifth, and, 72 for the seventh with Will Williams.

Carter more than doubled his previous best of 101 with his epic knock, slamming 21 boundaries and three sixes in more than eight and a half hours of concentration.

Captain Stephen Murdoch (deputising for Cole McConchie who has been sidelined with a broken arm) declared at 570 for eight shortly after tea with a lead of 254.

With two wickets for both paceman Andrew Hazeldine and spinner Theo van Woerkom before stumps, the Firebirds would have to work hard to avoid an outright loss, with 22-year-old debutant Troy Johnson and captain Michael Bracewell facing the immediate challenge the next morning.

Earlier, Jimmy Neesham had carried on from his overnight 31 to post a half century for the visiting Firebirds, but he lost his tailend partners before becoming the final wicket at 316 in the morning session, Andrew Hazeldine finishing with 4-62.

Neesham and Iain McPeake (2-42) then combined again with the ball this time to have Canterbury 98 for three in response, before McClure came to the rescue with his ton.

In his first Plunket Shield match of the summer, he headed back in unbeaten at stumps on 110*. Leo Carter was still with him on 62* and when they resumed on the third morning Canterbury would need another 75 runs to knock off the lead, with a handy seven wickets in hand.

Jimmy Neesham was keen to kick on for the Wellington Firebirds, but risked running out of partners in Rangiora after the visitors went to stumps at 283 for eight. The allrounder was set to begin day two unbeaten on 31 after Rachin Ravindra (caught on 78) and Michael Bracewell (caught on 87) had provided the ballast for the Firebirds’ innings, after having been sent in by new Canterbury captain Stephen Murdoch at Mainpower Oval.

The wickets were shared by his home five-strong attack, Andrew Hazeldine picking up 3-56 off just 12 overs and Fraser Sheat claiming a brace for three bowling bonuses before stumps.