THE STAGE IS SET – Canterbury Wellington Grand Final at the Basin 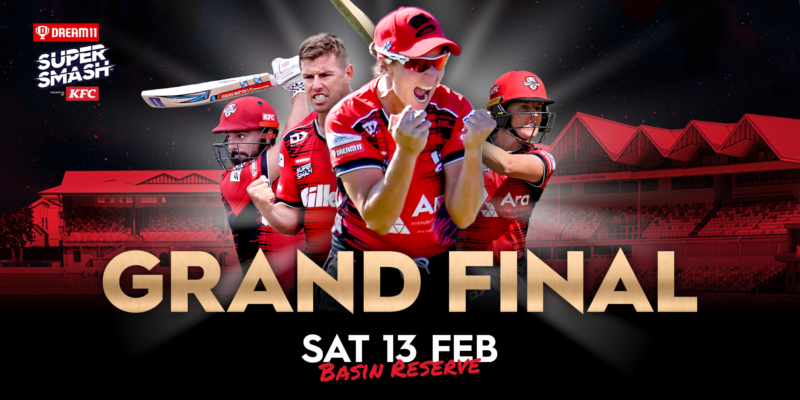 The Canterbury KINGS and MAGICIANS will be on the hunt for their maiden Dream 11 Super Smash titles when they square off against the Blaze and Firebirds at the Basin Reserve tomorrow.

A final over thriller at Eden Park yesterday saw the KINGS qualify over the Stags thanks to a record breaking 132-run, fifth wicket partnership between Cam Fletcher and Daryl Mitchell with both players bringing up personal bests.

The Canterbury MAGICIANS journey to the Grand Final on the other hand was a little less stressful having qualified top of the ladder and automatically advancing to the final.

It will be the first time in nearly a decade that the men have qualified for a T20 Grand Final with the last outing being back in 2012 with a Peter Fulton-led Canterbury Wizards side.

Now, from the coaches’ chair, head coach Peter Fulton knows it’s not the time to be complacent.

“We’re taking time to appreciate the win and the performances from yesterday, but the win isn’t going to count for anything come Saturday so we’ve got to move on pretty quick and focus on the next task at hand, “he said.

“The Firebirds are a great team and they’ve shown that throughout the season, but, through our own experience against them, we know they’re beatable.

“The team will take a lot of confidence and self-belief out of the elimination final, so that should bring the best out of them at the Basin”.

The Canterbury MAGICIANS have had plenty of grand final tussles with the Blaze over the years, none more recent than the 2018/19 Super Smash final where Wellington won a last ball nail biter at Eden Park.

MAGICIANS head coach, Rhys Morgan is looking forward to the battle ahead.

“We know the challenge Wellington will provide us.

“They have game breakers, but they have shown this season that when their middle order is under pressure, they often don’t respond well.

“This is a chance for our team to show the improvements they’ve made over the season by taking on some of the best players in the country on the big stage”.

The MAGICIANS will be without one of their senior all-rounders – Jacinta Savage on the side lines after fracturing her ankle at training last week. Allie Mace-Cochrane has come into the side as batting cover.

All four teams have met on two occasions so far this season, with each team walking away with one win a piece.

Follow both matches live on Spark Sport or at scoring.nzc.nz