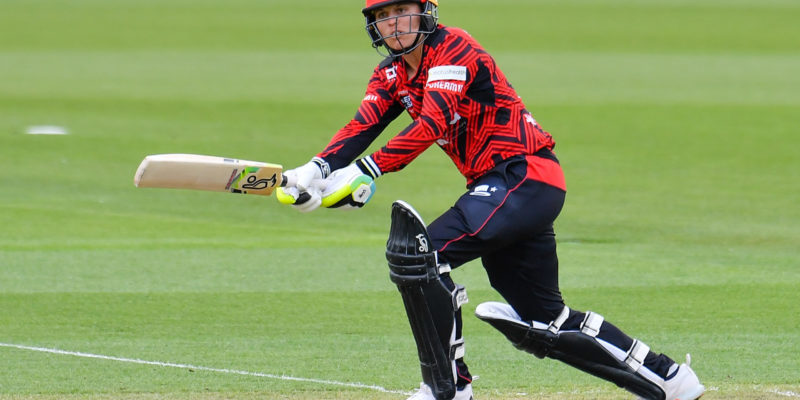 Nat Cox dazzled in her 50th T20 appearance for the MAGICIANS, partnering with powerhouse Lea Tahuhu in a thrilling last over victory against the Central HINDS at Hagley Oval.

Both the MAGICIANS and the HINDS were hunting their first Dream 11 Super Smash win of the season, and visiting captain Jess Watkin won the coin toss and elected to bat first.

The MAGICIANS struck early and Watkin found herself in trouble in the 5th over, when Frankie Mackay leapt backwards from mid-off to dismiss the danger-striker cheaply for 7 runs.

HINDS 25-1 thanks to this wicket and classy catch from Frankie Mackay!

Yet fellow opener Natalie Dodd led the HINDS with the bat, building a 64 run partnership with Mikaela Grieg that threatened to take the game away from the MAGICIANS.

Missy banks made the much needed breakthrough, dismissing Grieg in the 15th over for 36 off 26 balls to shift the momentum of the game.

Young gun Abby Gerken donned the gloves for the first time for Canterbury, and took her first stumping the very next ball, bringing Dodd’s impressive knock to a close, finishing on 52 off 40 deliveries. The HINDS were 116/4 with four overs remaining.

With two new batters at the crease, the MAGICIANS took control of the innings. Mackay took two wickets in three balls in the 17th over, and with the help of economical bowling by Asmussen and Satterthwaite at the death, the HINDS were pulled back and posted 137/7 after their 20 overs.

Bowlers Banks, Asmussen and Mackay each took two wickets and Satterthwaite with one.

Nat Cox stepped out to the crease in her milestone game with a target of 138 needed for victory, which she would then go on and chase down in dramatic fashion during her marathon innings that steered the MAGICIANS home for their first win.

However the MAGICIANS run chase was not smooth sailing by any means, as the swing and pace of CD opening bowlers scalped top order batters Gerken and Satterthwaite early, leaving the MAGICIANS 15/2 after the powerplay.

Cox dug it deep, and saw out the strong CD bowling attack with short cameos from MAGICIANS middle order Mackay and Jacinta Savage, building respective 35-run partnerships with each.

However scoreboard pressure was mounting, and after rebuilding a platform of 82/3 after 15 overs, the MAGICIANS were requiring over 13 runs an over to get over the line.

Savage found herself out caught trying to up the momentum which brought Lea Tahuhu to the crease, a powerful striker of the ball known to have taken the MAGICIANS over the line in dire run chases before.

The equation of requiring 62 runs off 24 balls with Tahuhu at the crease felt all too familiar, with flashbacks of Tahuhu clearing the rope at the Basin in last year’s clutch Grand Final performance ringing in mind.

Arguably what better two women to be standing at the crease with a mountain of a job sitting on their shoulders.

Tahuhu lodged just her third delivery straight into the crowd, followed by multiple quick two’s, and suddenly the chase felt within reach.
Hannah Rowe was set to bowl the second to last over, and Cox and Tahuhu were requiring 41 runs off the last two overs to win. After a boundary first ball by Cox and a single to turn the strike, Tahuhu took to Rowe, hitting back-to-back sixes to put the WHITE FERNS pace bowler under the pump. Pressure mounted, forcing CD to make errors in the field including an overthrow that conceded four runs.

A massive 26 runs were conceded off the game changing over, relieving pressure off the final over with just 5 runs needed to secure the MAGICIANS first win of the season. Singles were enough to tick over the score before Cox rocketed a delivery back down the ground for four to secure the upset 6-wicket win.

Cox anchored the team to the finish line bringing up her maiden T20 half century and highest ever T20 score of 63* not out off 53 balls in her milestone game, as big hitting Tahuhu got the team across the line in her mammoth knock of 39* not out blasted off just 16 deliveries.

The MAGICIANS sealed their first win of the season, momentum which will be vital for their next face off with the Wellington BLAZE at the Cello Basin Reserve next Sunday the 19th. Watch the action LIVE on Spark Sport.

The MAGICIANS return to Hagley Oval on BOXING DAY when they take on the Otago Sparks!