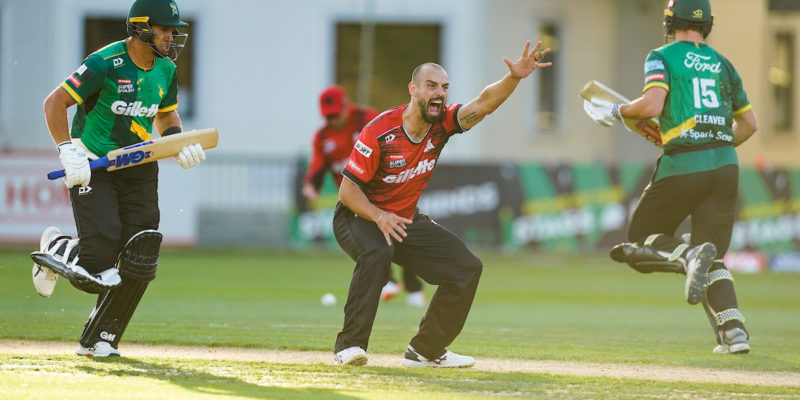 The Central Stags have claimed a 30-run victory over the KINGS in Napier, not only elevating them to second on the ladder, but confirming a KINGS-Stags Elimination Final (venue TBC), with the winner of that game to progress to the Grand Final against the Wellington Firebirds.

An explosive knock from Ross Taylor was the highlight of the evening in Napier, the BLACKCAP blasting seven sixes and two fours in his 36-ball 65.

The KINGS had sent the Stags in at the latter’s last home match of the league season, but Stags captain Tom Bruce had planned to bat first regardless.

Despite the Stags losing George Worker early – run out by his partner’s questionable call for just two – and Will Young at the start of the fifth over, plus having an unexpected disruption to their plans when allrounder Christian Leopard (back in the starting XI) spiked his own thigh just after the toss, bringing Joey Field back into the XI – the Stags’ innings got away on the KINGS with every heave of Taylor’s bat.

The KINGS will have taken some solace that they prevented the hosts from reaching another 200-total, and they had their moments – just not enough of them as a rampant Taylor started slaughtering sixes.

Both sides missed key chances in the field under lights but the KINGS found themselves increasingly under the pump as wickets kept falling left-arm spinner Jayden Lennox again impressing with a career best 3-20 off his four overs and Ajaz Patel likewise miserly with his 1-24.

Cam Fletcher was left unbeaten on a 21-ball 39* with the KINGS now hoping it will be third time lucky against the Stags on Thursday in the sudden death playoff.