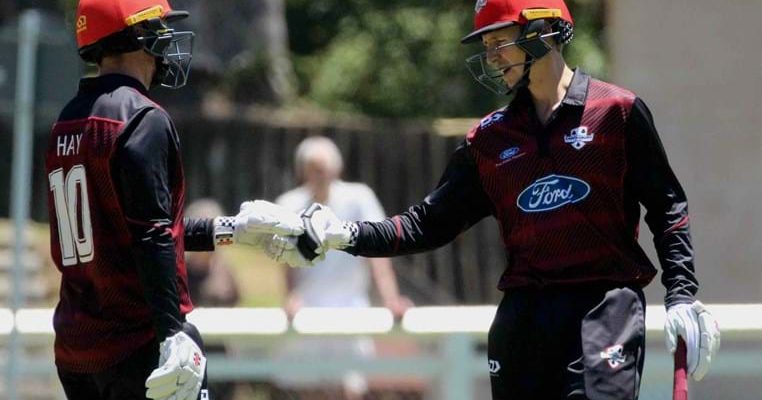 After a Canterbury 7-wicket win on Sunday, the Central Stags got revenge on Tuesday with a 6-wicket win of their own claiming their first points in the Ford Trophy.

Adapting well to both the sluggish conditions and a prematch calf niggle that saw strike bowler Seth Rance replaced in the starting XI, their first win of the one-day campaign came off the back of another tight performance from spinners Jayden Lennox and George Worker, a fresh opening attack in youngsters Ray Toole and Joey Field stepping up to the plate and a cautious Tom Bruce and Josh Clarkson walking it home to ensure the bonus point landed in their kit bag.

It was captain Bruce’s 50th List A appearance and he started off on the perfect note with a toss win, sending in Canterbury who had brought in Matt Hay and Theo van Woerkom after losing run machine Ken McClure and Matt Henry to the New Zealand A side.

It would be the first time brothers Matt (who made a career best 49) and Mitch Hay appeared together for Canterbury, but none of the visitors managed to get a solid partnership going as the Stags began to take regular wickets and backed it up with an improved fielding effort.

Dismissed for just 158 in 41.1 overs, Canterbury had to go back out and field for 5.4 overs before the lunch break – and it was long and awkward enough to grab two key early breakthroughs, George Worker and Bayley Wiggins falling to pacemen Will Williams and Sean Davey.

With the ball, their rookie spinner Jayden Lennox once again netted career best figures with 3-30 while Worker was also economical with his 1-6 off three. Allrounder Christian Leopard had wrapped up the Canterbury dig with a career best 2-22.

It was the Stags’ last Ford Trophy home game in the regular season with four away games to come in February and the two sides will next meet in Christchurch in the Dream11 Super Smash in the first match under the new Hagley Oval lights on 10 January 2021, to which admission is free.

Canterbury’s loss saw their Ford Trophy lead usurped by Northern Districts who meanwhile executed another win over the Otago Volts with which to segue into the T20 season.