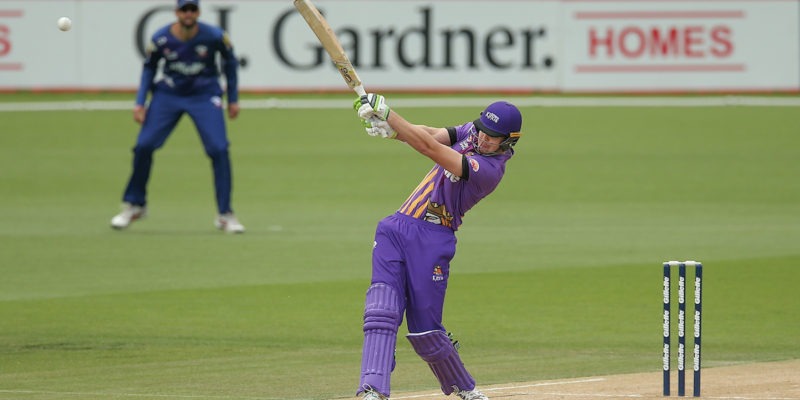 Another match, another tough loss for the Kings in the Super Smash.

On another good Hagley Oval wicket, an early ambush by Auckland’s pace bowlers set the tone for the match as the Kings’ struggled to 122 off the back of contributions by Cameron Fletcher and Kyle Jamieson. From there it was one-way traffic as Glenn Phillips and import Daniel Bell-Drummond struck composed half-centuries to lead the Aces to a comfortable win and second place on the Super Smash ladder.

The Kings meanwhile remain in last spot but can atone for the loss when they host the fifth-placed Volts back at Hagley Oval this Saturday.

After being sent in to bat, the Kings found the going tough early on as Auckland’s seamers broke through the top order. Tom Macrury’s debut didn’t last long, holding out to long on in the first over, before Stephen Murdoch did the same to give Matt Quinn his second wicket. When Chad Bowes and Cole McConchie also fell to aerial shots and Andrew Ellis was caught behind to a reverse sweep off Will Somerville, the Kings were reeling at 35 for 5 in the seventh over.

Fletcher and Henry Shipley were tasked with the recovery operation, and added a further 25 runs before Shipley was run-out in a horrible mix-up. Fletcher and Kyle Jamieson, who has impressed with the bat thus far, then finally got the innings going with a 55-run stand off 49 balls for the seventh wicket. Fletcher played a couple of lovely strokes either side of the wicket while Jamieson took the long handle to Roneel Hira, launching him over long on for six for the innings’ only maximum.

It ensured the Kings would finish at 122 for 8 off their 20 overs, with Fletcher’s run-a-ball 43 being the highlight. Quinn had a day out in Christchurch, taking 4 for 22 from his four overs, whilst Somerville was miserly, conceding just 14 runs from his spell.

A big win for the @aucklandcricket Aces over the @canterburykings in the #bksupersmash by nine wickets! The Aces move into second in the table with just two rounds to go #kingsvaces #cricketnation ? @photosportnz

The Canterbury bowlers worked hard but the opening pair of Phillips and Bell-Drummond showed the surface to be very true in nature, with the batsmen hitting through the line when it was full, as well as being punishing on the pull shot when the ball was pitched short. Bell-Drummond was content to stay deeper in his crease when driving the ball, whilst Phillips pulled the ball hard and flat through square leg on a few occasions. He would bring up his fifty off 39 balls with six fours and two sixes, whilst Bell-Drummond would do the same in 46 balls, as Auckland brought up their 100 in the 14th over.

The only breakthrough would come late in the match, with Phillips pulling a short Jamieson delivery to fine leg where Todd Astle took the catch. It took his tally to a tournament-high 15 wickets three more than nearest rival Blair Tickner, in what was another good spell from the tall quick. Todd Astle also bowled with notable control in conceding 27 runs from his four overs, while Will Williams got his first run of the season. It in the end however, it was the Aces who held the cards as they swept home with 17 balls to spare.

We’re back next weekend (2nd Feb) to take on the Otago Volts. Grab your tickets here.