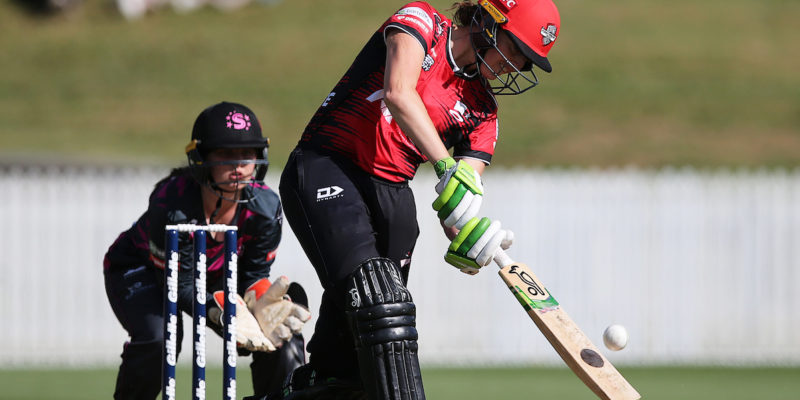 WHITE FERN Amy Satterthwaite put on a masterclass in the crunch clash between the Canterbury Magicians and Northern Spirit at Seddon Park this afternoon.

Satterthwaite was everywhere in the game, taking a wicket and two catches in Northern Spirit’s innings after they were sent in on their home turf, then playing a gem of a knock to secure the winning chase.

Spirit had put 124/5 on the scoreboard in a match reduced to 19 overs, showers splashing across Waikato in the previous 24 hours.

The opening pair of Kate Anderson (35 off 38, including a six) and Brooke Halliday (a run-a-ball 35) got the hosts off to a powerful start with their 76-run opening partnership, almost 12 overs passing before a wicket fell.

But the Magicians kept calm, until the all-star spin twins Frankie Mackay and Satterthwaite went bang-bang to remove both the well-set batsmen.

That became three wickets in five balls as Mackay whirled to 4-17, as Katie Gurrey (27* off 18) watched the middle order depart around her.

Two wickets came off both Mackay’s second and fourth overs, turning the innings on its head with her 4-17.

Doubly motivated to win in Lea Tahuhu’s 200th T20 game, Canterbury showed that anything Spirit could do, they could do that bit better.

Nat Cox got their chase off to a super powerful beginning, putting Spirit on notice as she slammed three sixes and a boundary in her whirlwind 16-ball 31.

Cox shared a fast 40-run opening stand with Mackay who carried on to the 11th over as she built a platform with Satterthwaite.

Satterthwaite’s clinical innings was pivotal, 36 flowing off 27 balls to ensure the Magicians didn’t come under pressure at the death.

With just 18 further runs needed, she eventually fell to a good catch from Spirit captain Halliday, a class debut Dream11 Super Smash wicket for youngster Makayla Templeton who earlier in the day had been named in New Zealand’s first Women’s Under 19 squad.

Templeton then bowled Jacinta Savage around her legs but meantime Kate Ebrahim had been calmy ticking off the runs to finish unbeaten in an important victory for the visitors – and another tough loss for the hosts in their stalled campaign.