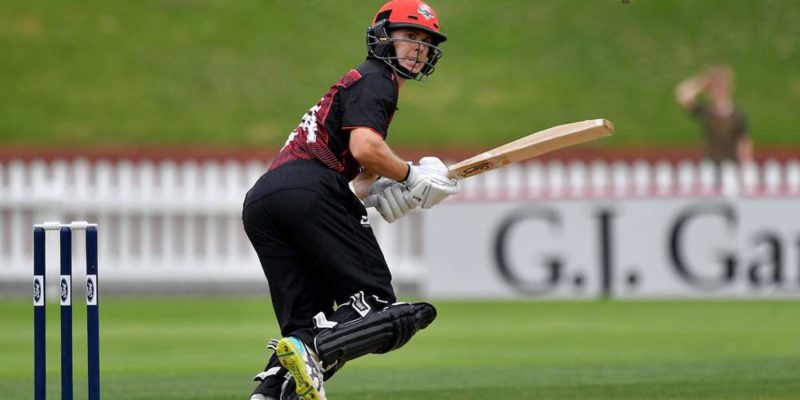 Canterbury had the statisticians working overtime in Rangiora, starting by introducing two List A debutants in Tyler Lortan and Matt Hay.

But no matter which line-up Canterbury puts on the park, it’s business as usual – and that business is humming – for the red and blacks early doors this season.

Sent in by the Firebirds, Canterbury captain Leo Carter was hardly fazed: he produced his highest List A score (60 off 52) in just his second match as skipper, while veteran Todd Astle equalled his own previous best of 83 (69 balls) as they shared a record 130-run fourth-wicket partnership for their team in Ford Trophy matches against the Firebirds.

They were crucial performances with cameos peppering the top order and Matt Hay left unbeaten on a quick 20* off 11 to finish the 40-over innings.

Chasing Canterbury’s 236 for five, the Firebirds had needed a couple of solid partnerships of their own to stay in the hunt, and they got them with a 98-run stand for the fifth wicket between captain Michael Bracewell (55) and Fraser Colson.

Later, a seventh-wicket record for the Wellington team against Canterbury of 54 between allrounders Jamie Gibson and Peter Younghusband ensured there would be no bonus point for the competition leaders.

The problem for the Wellingtonians was again that the bulk of the order didn’t get going.

BLACKCAP Matt Henry, back from his injury break and hitting his mark with 3-27, and form horse Will Williams (3-37 – including a wicket with his first delivery), tore through the tail to ensure a comfortable 31-run victory for the red-hot hosts.

Leaders Canterbury stay unbeaten as they head into their next match at Hagley Oval on Sunday while the Firebirds are one of three sides who will be looking to get on the board in round three, against the Stags in Palmerston North.