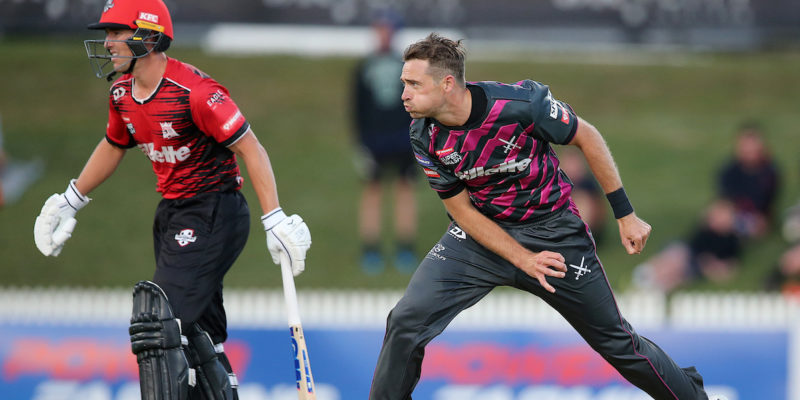 Kane Williamson delivered the runs, but it was a stinging team performance with the ball that set up a Knights win over the high-flying Canterbury KINGS.

In any other circumstances, the KINGS’ second loss in seven games would have been deemed an upset, but they came up against a full-strength Knights unit at Seddon Park with not only their BLACKCAPS – Kane Williamson playing his first T20 for his team since 2014 – but their Domestic campaigners doing the bizzo.

The Knights needed the win big-time, sitting on the brink of the ladder with just an outside chance of making the top three qualifiers.

But tonight was their night. After captain Anton Devcich sent the KINGS in, stars Tim Southee and Trent Boult had the visitors 19/2 inside the first five overs but it was first change Anurag Verma who once again showed what a slippery handful he can be on Seddon Park.

He had a wicket first ball: Ken McClure caught by the skipper, and it just kept going south for the Cantabrians when spinner Joe Walker came on in the seventh and picked up two more in his first over.

With Daryl Mitchell gone for just eight in his first T20 back at his old home ground against his former teammates, pressure fell on KINGS captain Cole McConchie to salvage the innings with the score at 46/5.

He lost Cam Fletcher just a few balls later as Boult returned, and he and Todd Astle had to work hard for their runs through the middle.

But they brought brief hope for the Kings with their 48-stand for the seventh – until Verma and Scott Kuggeleijn grabbed their wickets in the space of five balls.

Now the KINGS were 100/8 with the quicks lining up to have a crack at the tail, Kuggeleijn getting the better of Matt Henry before Brett Hampton finished it off in the penultimate over to walk off with the perfect figures of 1-0 off 0.1.

The Knights then sweated on a lengthy rain break. When the night skies finally obliged, the hosts’ chase was reduced to 110 off 18, and more showers would see that become 91 off 14: a required rate of 6.5.

Tim Seifert got them going with early boundaries while Katene Clarke clocked the first six off Matt Henry, only to be caught three balls later off Astle for a quick 8-ball 16.

Seifert (24 off 18) carried on to the eighth but would be the only other Knight to depart once Colin de Grandhomme joined Williamson in the middle.

They were as calm as they were brutal, Williamson clipping off five boundaries in his 27-ball 34 while de Grandhomme took a huge six off Daryl Mitchell en route to bashing the winning boundary in just the 11th over with an ocean of time to spare.

The Knights now need to win their two remaining games to stay alive, as well as boosting their net run rate if they are to break into the top three. However, their fate also rests on the fortunes of the three teams above them – the Kings may yet have the last laugh.