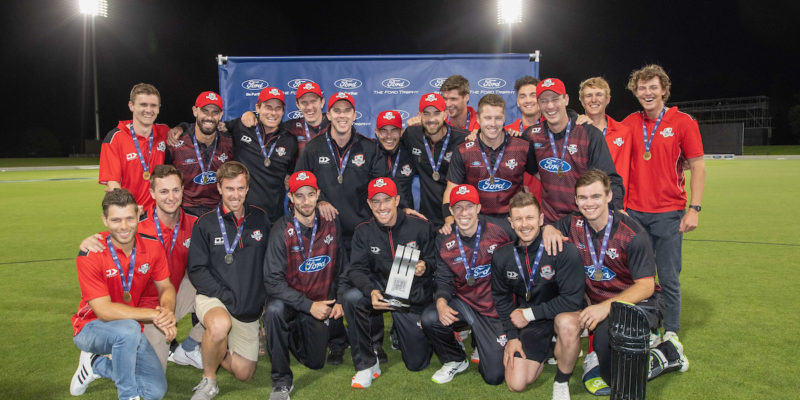 The Canterbury men look to replicate last seasons winning form in the 2021-2021 Ford Trophy one-day competition when it returns on Tuesday at Seddon Park in Hamilton against last season’s runners up Northern Districts.

Canterbury are last season’s reigning Ford Trophy champions and have had a successful start to the season with their red ball campaign. Coach Peter Fulton is looking forward to his side taking that momentum into the one-day competition.

“We’ve played some really good cricket, so the basics of cricket don’t change. We’ve got to keep doing the basics well, and hopefully the guys will have really strong campaigns and that will help us win games,” he said.

Fulton has named a mix of experience and youth in his 12-man side travelling to Hamilton, featuring young Will O’Rourke, a young seamer on the verge of claiming his first Canterbury cap.

“Anytime someone has a chance to debut is always a really special time… he’s an exciting young fast bowler and hopefully has a long career in front of him,” Fulton said about the 20-year-old.

Jack Boyle is a top order batter to look out for this Ford Trophy campaign, after top scoring with 31 off 25 for Canterbury KINGS in Friday night’s Dream11 Super Smash loss to the Wellington Firebirds.

Boyle spoke of feeling in form leading up to the white ball campaign saying, “I feel like I’ve been hitting the ball well in the nets, in Canterbury A games, and club cricket games, so I’m chomping at the bit to get going next week.”

“It’s been good preparation leading up into this week, and there’s a really good feel around the camp,” he said.

Coach Fulton brings Boyle into the white ball side, hoping to produce dominant batting performances against the Northern side, recreating a dominate display of batting in last season’s final chasing Northern Districts’ total of 289 down with 5 overs to spare.

“Jack has an outstanding Ford Trophy record for Canterbury, so he’ll come back into the side and hopefully we can get some big runs out of him,” Fulton said.

“It’s a new season, it’s exciting to play white ball cricket, and we’ve got a title to hopefully defend.”

The squad is absent of unavailable BLACKCAPS Tom Lathan, Henry Nicholls, and Daryl Mitchell who are overseas with the Blackcaps Test team taking on India, and BLACKCAP Todd Astle, who is returning from the India T20 series.