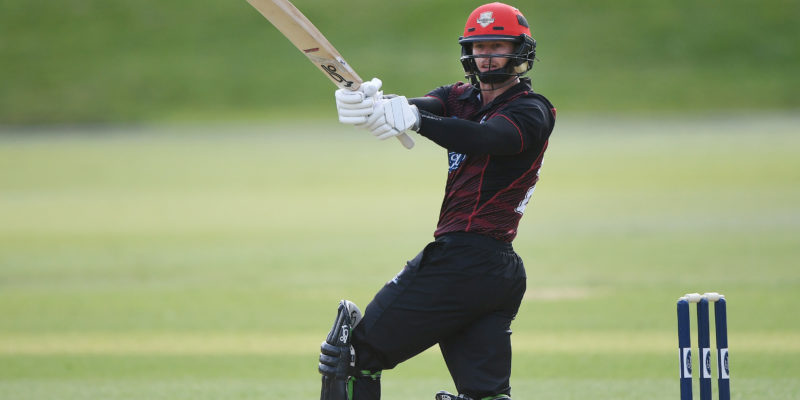 Canterbury moved up to the top of The Ford Trophy points table while the Otago Volts headed south in the first neighbourhood derby of the back end of the season.

With Northern Districts simultaneously losing in Wellington, Canterbury’s ultimately convincing victory in Queenstown meant they went equal on 22 points, and ahead on net run rate to bump ND down into official second – raising the stakes for Sunday’s round eight at the same venues.

Captain Cole McConchie had won the toss and batted at picturesque John Davies Oval and, despite the relatively early loss of his openers – Jacob Duffy and Nathan Smith striking in their opening spells, his fellow middle to late-middle order did not let him down as they threaded together partnerships.

Tom Latham led the way from first drop, top-scoring with 63 (75 balls) and sharing the largest of those stands with the captain himself, the pair crafting 77 until McConchie (31) was caught at 91/3 in the 21st over.

The Volts’ pace quartet of Duffy, Smith, Michael Rae and Mitch McClenaghan – playing his first Ford Trophy match for the side in his 100th List A appearance overall – had all made a tight start, but the introduction of spin had invited the pair to find some boundaries and, while it led to McConchie’s downfall, Latham pushed on past his half century marker as he recombined with Leo Carter (29).

From there, Canterbury’s innings gathered momentum, Cam Fletcher’s 45 flying off 49 balls and Theo van Woerkom (31), Sean Davey (22 off 11) and tailenders Matt Henry (11 off six) and Will Williams 7 off 11) all chipping in en route to a tally of 271 before they were bowled out in the last over.

Anaru Kitchen had wrapped things up off consecutive deliveries to finish with 3-31 and McClenaghan, no doubt fired up after having missed the cut for the IPL, was likewise economical going for just 36 runs off his 10. Captain Duffy pocketed the rewards, however, with 4-53 through the prime of Canterbury’s order.

The Volts’ line-up should have been a match for that chase, but they got off to a bad start as Hamish Rutherford’s dry run continued on from the Dream11 Super Smash. Rutherford had been superb at the start of the competition pre-Christmas, but now the pressure was going on his contemporary Neil Broom to again lift the top order into gear.

Rutherford’s opening partner Nick Kelly had meanwhile already gone as Henry claimed them both in his second over, bringing Broom (below) and Kitchen together.

They would steady the blue and gold ship as they batted together into the 30th, a 135-run stand for the third wicket that was a new Volts record in List A matches against Canterbury.

Finally, on 69, Kitchen went to hook a short one from Ed Nuttall and ended the quick bowler’s frustration as he sent the catch to the sure hands of Carter at 144 for three.

Rippon stayed with Broom for several overs but didn’t get going, but the most damaging over came in the 40th when tweaker van Woerkom (below) came on for his last spell and got Dale Phillips, then the key one of Broom, caught behind by Latham, in the space of three balls.

It opened the gates at the death for the visitors who rattled on through the last four wickets before the Volts could get close enough to rattle them back, the hosts all out for 217 with almost five overs left.

Henry finished with 3-34, Davey and van Woerkom with a brace each as the Volts slipped below the Aces down into fifth spot.