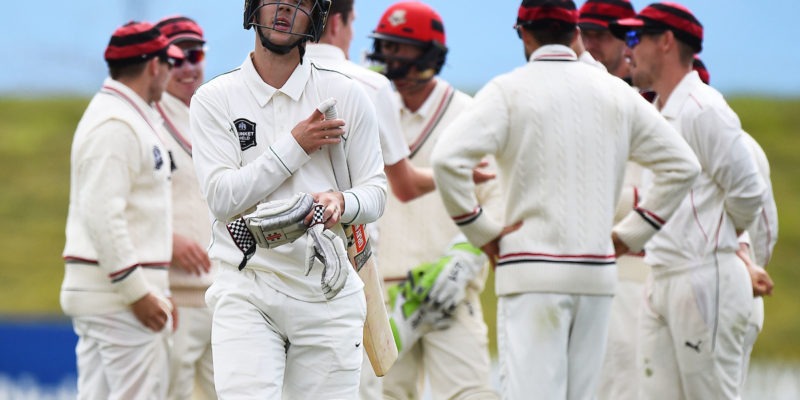 With just three rounds to go, Canterbury became the first team to defeat the Stags since October 2016, after a nail-biting penultimate afternoon in Rangiora.

In the 100th first-class match between the two sides, Plunket Shield leaders the Central Stags were dismissed by Canterbury for 261 in just 66 overs on the first day at Rangiora’s Mainpower Oval — after captain Greg Hay had elected to bat first on a deck that offered some movement.

Hay himself was one of the early victims as the return of BLACKCAP Matt Henry paid dividends for the hosts — Henry going on to bag five for 76 off just 20 overs — his 13th first-class five-wicket-bag, and sixth for Canterbury and Fletcher bringing up his 150th First-Class dismissal.

Canterbury began their reply with a maximum 27 overs left in the day but suffered an early setback losing both openers is quick succession, but Stephen Murdoch (47*) and captain Cole McConchie (32*) steadied the ship before stumps.

On Day 2, McConchie went early from a Bracewell short delivery before Carter and Murdoch found a similar fate, leaving Canterbury on 99/5. Fletcher and Shipley delivered with the bat, both contributing valuable half-centuries getting Canterbury through to 280 – a lead of just 19 runs.

Central Stags’ second innings began in a similar fashion to the first with Greg Hay getting sent back to sheds early, Shipley getting his first for the day.

But on Day 3, it was the Canterbury spinners who did the damage. Astle, who was released from the Black Caps’ ODI squad against Bangladesh for Plunket Shield duty, took three wickets in the Central Stags’ second innings, with fellow spinner Cole McConchie grabbing his best bowling figures in a first class match with 4-46 leaving Canterbury to chase 208 runs for victory.

There were echoes of the Round One thriller between the same two sides, Ryan McCone (4-25) keeping the Stags in the hunt and getting Canterbury eight down,however this time Matt Henry and Cam Fletcher ticked off the winning runs to seal Canterbury’s second outright of the season, and end the Stags’ undefeated streak at 21 matches: a CDCA first-class record that finished three short of equalling the national record.