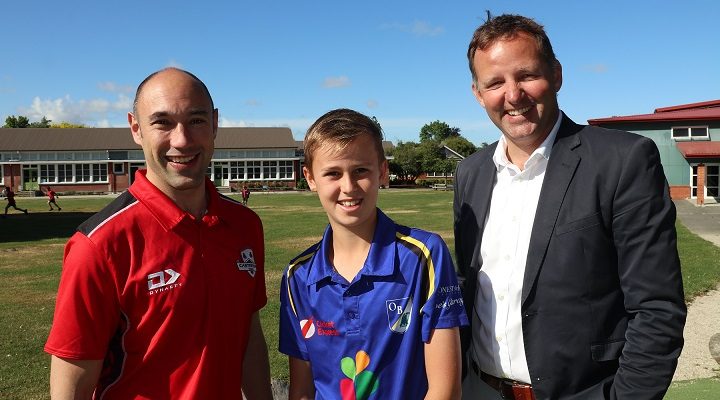 Canterbury Cricket is going in to bat for Māia Health Foundation for its 19/20 season.

The Canterbury Cricket Association has today announced the Māia Health Foundation as its charity of choice, ahead of the first Dream11 Super Smash fixture on Sunday.

“We feel the work that Māia does in the community and the values they work toward, really reflect the goals that we set ourselves at Canterbury Cricket.”

The Canterbury Cricket Association and Māia Health Foundation will be partnering with one another throughout the season in a variety of ways, including during match days.

“Māia Health Foundation is a wonderful cause that is providing much needed support to some key game-changing projects in Canterbury and we are delighted to support them,” says Price. Māia Health Foundation chief executive Michael Flatman says they are thrilled to have the support from the sporting organisation.

“By backing us, Canterbury Cricket are not only supporting our initiatives to enhance health services, but all those children and adults who benefit from these health services.”

To date the Māia Health Foundation has raised $7 million – $5.2 million of which has gone towards the upgrading of the helipad at the Christchurch Hospital Hagley building and enhancement of the child health facilities. The funding for the child health facilities has enabled multiple enhancements to the children’s wards at the new hospital. These include a new children’s play area, an activity room and school room and 60 parent beds. The enhancements also mean when times are really tough families can stay right alongside their children in a new ICU Family Room, which includes ensuite facilities and access to a laundry and kitchen facilities. On Monday, and ahead of the first game of the Dream 11 Super Smash competition, Paparoa Street School student William Coughlan, 10, was able to meet with representatives from Canterbury Cricket and Māia Health Foundation.

William, a keen cricketer, said it was really cool to know that Canterbury Cricket wanted to support kids like him.

Three years ago William had to be airlifted to Christchurch Hospital, after he ruptured his liver while on a family holiday at Glendhu Bay.

Mum Vanessa, says the moments between the helicopter landing at Hagley Park to the time William was admitted to the hospital were tense and terrifying.

“In all those minutes you’re fretting about what could go wrong, you have a seriously injured kid and you don’t know what will happen. You’ve got to get to the hospital as quick as you can.”

William recovered, and since then he and his family have been strong supporters of the Māia Health Foundation and the work they do to raise money for game-changing projects in our health system.

“I love cricket and my home team is Canterbury, so I think it’s so awesome that they are helping Māia to support people like me who end up sick. I will cheer extra hard at the matches now!” says William.

Price says he is now looking forward to seeing where the partnership goes.

“Any opportunity to work with wonderful charities in Canterbury is always exciting.”