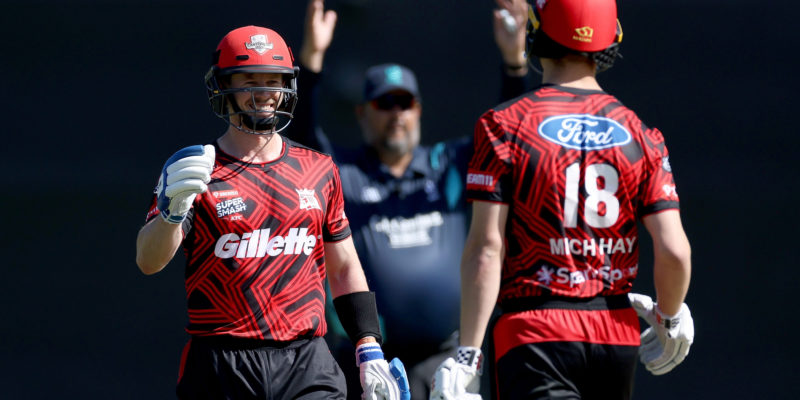 Mixed results in the Super Smash for our KINGS and MAGICIANS over the weekend, with the men racing to victory over the reigning champions and the women falling short.

Losing the toss, Frankie Mackay and her MAGICIANS were thrown the ball on a used deck surrounded by an outfield that plugged early on. Amy Satterthwaite, Missy Banks and Jess Simmons combined well in the first 4 overs, restricting the BLAZE to 14-1 and taking the wicket of the dangerous Georgia Plimmer thanks to a sharp piece of fielding by Natalie Cox.

NAT COX coming up CLUTCH with this superb run out of Plimmer! BLAZE 25-1 after 5

Spinners were difficult to get away on this track, with Asmussen, Mackay and Satterthwaite all getting through their allotment of overs, all going at under six an over and taking two of the four wickets during the BLAZE innings.

Two costly final overs of 14 and 13 respectively brough the BLAZE to a decent total of 142 after their 20. Amelia Kerr being the stand-out once again with another 50.

The MAGICIANS batting effort got off to an unlucky start, with Nat Cox being stumped first ball after it bounced off the shins of McFayden.

Satterthwaite and Mackay looked to start building a partnership, however the former was tied down early thanks in part to a fantastic spell from Maneka Singh.

Captain Mackay continued to work away as wickets fell around her. Lea Tahuhu played a cameo role, striking the ball characteristically hard for her 15 before being caught off WHITE FERNS teammate Kasperek.

Missy Banks came in at 9 and worked the ball around for her almost run a ball 11 – an innings that will give her some confidence at the crease.

Unfortunately for the MAGICIANS, the damage was done early and they fell 45 runs short at the Basin. Mackay top scoring with an unbeaten 55* off 47.

As soon as the women’s game finished, the men’s began. Another lost toss for the red and black meant that the KINGS were in the field to start. Matt Henry and Edward Nuttall took the new ball against a rampant Finn Allen who was looking his typical dangerous self.

Nuttall removed FIREBIRDS opener Georgeson with his first ball thanks to a contender for catch of the season from Fletcher and the KINGS were on the board. The following over saw Matt Henry dispatched for 2 sixes and a four from Finn Allen before deceiving him with the perfect slower ball yorker, cleaning the talented youngster up before his innings could really get started.

The KINGS smelt blood in the water and Nuttall struck again an over later, taking the wicket of Johnstone thanks to another outstanding bit of glovework from Cam Fletcher.

Shipley was brought on an over out of the powerplay and struck with his first ball, taking a diving caught and bowled to dismiss Nathan Smith.

The @CanterburyCrick Kings have another thanks to a GREAT caught and bowled from Henry Shipley at the Basin Reserve. Follow play LIVE with @sparknzsport and @TVNZ 1. #SuperSmashNZ pic.twitter.com/zdPOGhkN6d

The innings was an arm wrestle, with Wellington continuing to pick up runs and Canterbury managing to pin them back with vital wickets in the middle overs from Coburn and Astle.

The innings finished with Wellington posting 151-9 off their 20.

Chad Bowes and Ken McClure strode out to the middle with the hopes of making a dent in the run chase. “Start as you mean to go on” must have been ringing in Bowes’ head as he dispatched the first 3 balls of the innings to the boundary, putting Bennett well and truly on the back foot.

The KINGS made it to 37 off the first 4 overs before Ken McClure mistimed one to midoff – caught for 13 off 10. Bowes continued on in style, finding the boundary regularly and allowing his partners to work their way into the game.

Carter and McConchie couldn’t quite hit their straps and were both back in the sheds by the end of the 9th over. With the score sitting at 76-3 after 9 overs, the game was in the balance.

Fletcher walked to the crease and proved once again what a multi-faceted player he can be, turning the strike to the set Bowes early and then finding his timing and easing his way into what would be a fantastic innings. Bowes and Fletcher combined for a nearly 70 run partnership off 6 over and put the game beyond doubt. Bowes passed his 50 shortly before Fletcher and young gun Mitch Hay finished it off, smoking a maximum over the head of Sears with 3 and a half overs to go.

A comprehensive display from a KINGS side that will only improve with the likes of Tom Latham, Henry Nicholls, and Daryl Mitchell coming back into the group over the coming weeks.

Catch the KINGS and MAGICIANS at Hagley Oval THIS BOXING DAY