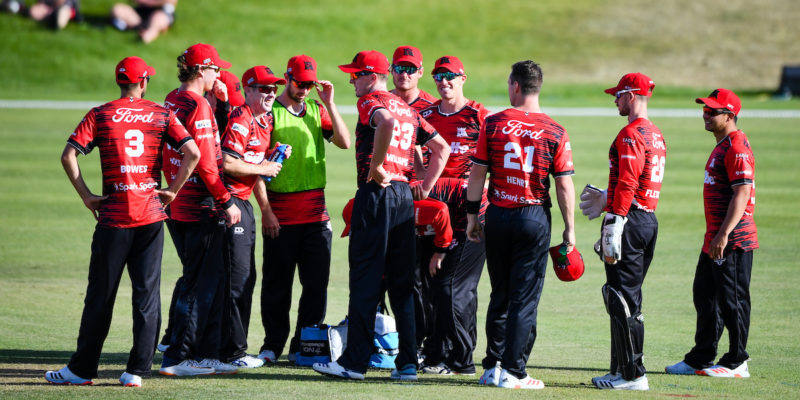 The Canterbury KINGS will welcome back two of their international stars for a sold out Sunday evening under lights at Hagley Oval.

Daryl Mitchell is in line for his KINGS debut and returns to the Canterbury squad after his successful stint with the BLACKCAPS where he brought up his maiden Test century this week.

Joining him in the 12-man squad is fellow BLACKCAP Matt Henry while fellow countrymen Tom Latham and Henry Nicholls were unavailable due to injury. Latham (elbow) and Nicholls (calf) are both hopeful of linking back up with the KINGS at the back end of the season.

KINGS head coach Peter Fulton said the return of Mitchell was a welcome addition to the side.

“It’s great to have Daryl back in the team after his time away with the BLACKCAPS.

“He’s been in great form this summer and it was pretty special to see him bring up his maiden Test century earlier in the week.

“Daryl adds further depth to our batting line up, while also offering another seam option to our bowling group”.

The Canterbury MAGICIANS also head home to Hagley undefeated after two rounds of the Dream 11 Super Smash with one win and one abandoned match in the books.

MAGICIANS coach Rhys Morgan has made two changes to the side that travelled to Auckland last week with Sarah Asmussen and Kate Sims coming into the squad.

Lea Tahuhu was unavailable with a small fracture in her finger, while Missy Banks is away with the Canterbury under 19 women’s side in the national tournament.

This game will be a historic event for cricket in Christchurch being the first night game under the new floodlights at Hagley.

The match is officially sold out after 8,000 people registered for their free tickets. It’s only the second Super Smash match to sell out after the 2016/17 final at Pukekura Park in New Plymouth.

“It’s fantastic to see so much interest around domestic cricket and the new lights at Hagley Oval.

“I can’t wait to see the embankment lined with a big Canterbury crowd cheering on our KINGS and MAGICIANS out in the middle.

“Again, a big thank you must go to our match day partners, Ara Institute of Canterbury and ChristchurchNZ for helping us put on this event”.