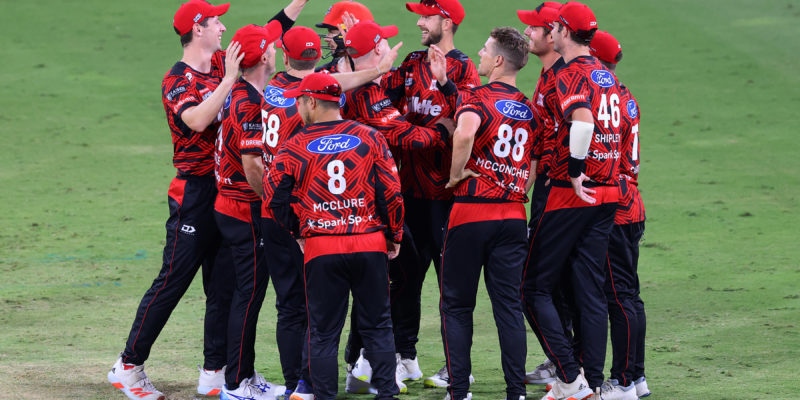 In what was one of the lowest scoring, yet most entertaining matches we are likely to see this season, the match began with the KINGS losing the toss and being put in to bat first.

Trent Boult took the new ball for the BRAVE in his return to Bay Oval against Ken McClure, who was looking aggressive early on. Sending one over the fence on the third ball of the game, McClure went after another Boult bouncer and didn’t quite get enough, holding out at deep backward square leg. KINGS 8-1 after 1 over.

A shaky start got worse in the following 5 overs of the powerplay, with Bowes and Carter being dismissed within the top six. Nicholls, who had been playing sublimely, cam out second best I a good battle with BLACKCAPS teammate Ish Sodhi and the KINGS found themselves in huge trouble at 55-4 after 7 overs.

Two wickets in two balls from Joe Walker removed McConchie and Fletcher and another an over later sent Astle back to the sheds.

A small amount of resistance came from Henry Shipley and Blake Coburn, but the last few wickets fell, and the first innings ended with the BRAVE needing 108 to win off their 20 overs.

BLACKCAPS paceman Matt Henry opened for the KINGS and bowled economically, tying up the dangerous duo of Katene Clarke and Tim Seifert, who could only manage one run between them for the first over.

Ed Nuttall steamed in from the other end and pinned Clarke on the hip with his first ball, immobilising the destructive hitter. Rooted to his crease, Clarke started swinging for the fences – a tactic that proved effective, as the next five balls went 4, 6, 6, 6, 6.

One could have been forgiven for resigning the game there and then to the BRAVE. At 30-0 after 2 overs, the remaining runs could have seemed a formality. However, Matt Henry and Canterbury’s three-pronged spin attack weren’t going to give up without a fight.

COBURN breaks through and gets our third wicket

Henry and the spinners (McConchie, Astle and Coburn) bowled 15 overs between them at a combined economy rate of 3.2 and took 5 wickets throughout the innings. Sharp work in the field from the seemingly omnipresent Chad Bowes made the batters work for every single run and the pressure began to mount.

Heading into the penultimate over, the BRAVE had somehow found themselves needing 15 off the last two overs. Captain Cole McConchie stepped up to bowl the 19th, keeping it to just 7 and taking the wicket of Kuggeleijn in the process.

The ball was then thrown to Nuttall, who had bounced back tremendously after his expensive first over, only giving away a collective 6 runs in his previous two overs. Needing 8 to win, Nuttall’s first two balls were hit aerial and taken in the deep, removing Sodhi and Verma – 8 needed off 4 balls. Nuttall to boult – 1 run. Nuttall to Walker – OUT, caught by Chad Bowes.

With two balls to go and 7 runs needed, Katene Clarke hobbled out to the middle of Bay Oval after retiring hurt from a blow suffered at the hands of Nuttall in his first over. Nuttall to Clark – 1 run.

The BRAVE needed 6 to win off the last ball, with Trent Boult facing up to a fizzed-up Edward Nuttall. The KINGS paceman steamed in and bowled, just missing his length as Boult gave himself room and swung over midwicket. The ball disappeared into the crowd and the great escape that nearly was – wasn’t.

To come back from where the KINGS were at the start of the innings showed the fight and determination in the group. Don’t count out this KINGS side just yet – plenty more cricket to come!