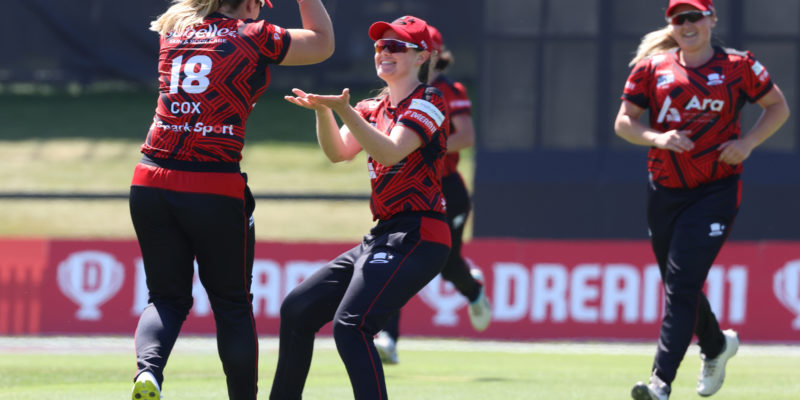 The Canterbury MAGICIANS met rivals Auckland HEARTS in a mid-table clash on Tuesday, that saw the HEARTS just edge over the home team and move into third position in the competition.

The match was Kirsty Nation’s 50th T20 for the Canterbury MAGICIANS.

Home skipper Mackay called correctly at the toss and choose to have a bowl on a seaming-friendly wicket. Powerhouse duo Tahuhu and Satterthwaite opened the bowling and made quick work of the opening HEARTS top order, with three batters dismissed inside the powerplay cheaply with the help of seaming Simmons.

The @CanterburyCrick Magicians strike early! Big wicket of the @aucklandcricket skipper Lauren Down thanks to a sharp catch from Nat Cox! Follow play LIVE with @sparknzsport. #SuperSmashNZ pic.twitter.com/gIgsWJlm74

Missy Banks with the superb run out with only one pole to aim at dismissed Arlene Kelly, and Nat Cox took an outstanding catch at backwards point to dismiss skipper Lauren Down. HEARTS were in trouble at 26/3 after the first six overs.

Our MAGICIANS have three inside the power play! @AucklandHearts 26/3 after the first six 🏏

HEARTS batters Katie Perkins and Bella Armstrong led their team through the middle overs, putting on a 30-run partnership rebuilding momentum for the visiting side. Savage broke the partnership, as keeper Laura Hughes took a great catch behind the stumps to dismiss Armstrong, not long before Jess Simmons bowled Perkins ending her knock of 29 off 37.

Middle order batters Izzy Gaze and Saachi Shahri put on a game changing partnership of 42 off the next four overs, propelling the HEARTS score to 112/6 with three overs to go. Banks with her second run out of the day dismissed Gaze for 24 off 26 and quick wickets from Satterthwhaite at the death brought in the HEARTS batting tail.

Aime Hucker hit a maximum off the last delivery of the game to take the HEARTS to 131/9 off their 20 overs. Satterthwaite, Simmons and Savage all took two wickets each.

MAGICIANS openers Satterthwaite and Cox were sent in with the bat with a job to do, and took the team to the half way mark unscathed for 51/0. Satterthwaite chipped a lofted cover drive to Lauren Down in the outfield and found herself caught out for a gritty 22 off 34.

10 OVERS INTO OUR WORK WITH THE BAT 🏏

MAGICIANS openers Cox and Satterthwaite take us to the 10 over mark unscathed 51/0.

Cox departed two overs later, after two catches went down in the 12th over, Shahri didn’t miss the third and Cox’s innings of 38 off 34, hitting four boundaries came to an end. MAGICIANS 72/2 after the 13th over, needing 60 off 42 to win.

Big hitting Tahuhu came to the crease and danced with fast bowler Molly Penfold in the 14th over. The young HEART bowled a full delivery which Tahuhu tried to clear the legside boundary with before falling short into Armstrong’s hands and departed on nil.

Skipper Mackay and allrounder Savage put up a 33-run fight, with Savage hitting three fours in the 17th over to push the MAGICIANS to 105/3 with three overs remaining. She found herself stumped in the 18th over coming down the pitch to Prasad and dismissed for a strong cameo of 20 off 14.

Kirsty Nation entered the crease in her 50th T20 appearance for the MAGICIANS needing 22 runs off the last 14 deliveries for victory. Nation pulled out a reverse pull shot for four, off a full-no ball delivery to start off the 19th over and the win seemed within reach.

Tight death bowling from Jonas and Kelly denied Mackay and Nation the victory, mustering up 12 runs from the final two overs and both being dismissed in the 20th to finish the MAGICIANS innings for 123/6.

The nail biting loss for the MAGICIANS meant the Auckland HEARTS now sit third on the competitions points table, four points ahead of the MAGICIANS with both teams having two games left in the round robins.

The Canterbury MAGICIANS next face the Northern BRAVE at home at Hagley Oval on Friday 21st, looking to pick up crucial points to keep in the running for an elimination final spot next week.