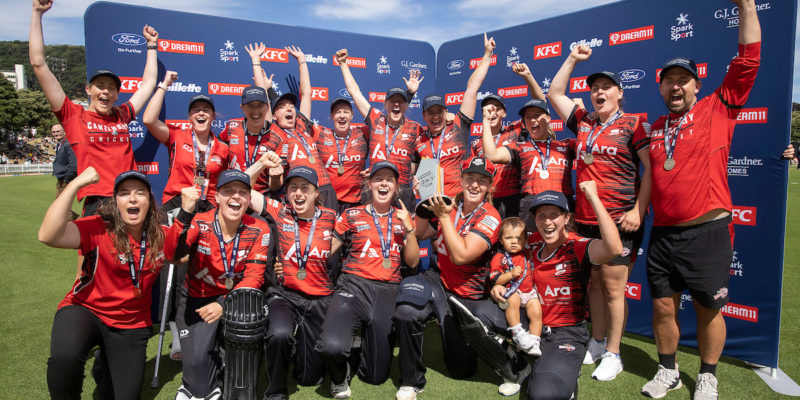 But today, a stunning late charge from a woman better known for her aggressive pace bowling stole that show as the Canterbury Magicians got up to snatch the 2021 women’s trophy with just two balls to spare.

The Magicians’ tight four-wicket victory ended Blaze’s three-year title tenure after a see-sawing game that saw both Finalists playing intelligent T20 cricket on a fresh strip at the Basin Reserve.

Both sides made a cautious start with the bat, took big wickets right when it counted, and turned in stellar performances with both spin and pace under pressure.

But it was ultimately Lea Tahuhu’s unbeaten 38* off just 20 balls — equalling her highest T20 score — that destroyed Blaze’s hitherto high hopes of a fourth straight title.

Tahuhu’s previous best had been a lonely 38 off 22 last season, on Lincoln’s small number three ground against the Central Hinds. Today she blasted three sixes into space in her best performance yet, centre stage on the Basin Reserve and under significant pressure – her matchwinning, unbroken 66*-run stand with Kate Ebrahim (below) the highest partnership of the Grand Final.

Tahuhu had joined Ebrahim at 60/6 in the 14th over with the Magicians in trouble as they attempted to chase down Blaze’s 125 for eight.

Both sides had made a cautious start on the fresh Basin wicket and – looking to avenge their heart-breaking last-ball championship loss two seasons ago, Magicians captain Frankie Mackay had sent in the Blaze after winning the toss.

Tahuhu and Mackay both played their part in a fine containment job after an uncommonly circumspect start from Sophie Devine and Maddy Green at the top with the bat.

Dangerwoman Devine’s 47 appeared effortless — but at a modest (by her standards) run-a-ball clip as she looked to pace her innings in the conditions, more anchorwoman than master blaster with just four boundaries in her innings.

Crucially for the Magicians, Devine’s knock lost its momentum and, when she was bowled by youngster Missy Banks at the end of the 14th, Blaze was still in the trenches at 100/2, with no Devine to escalate the charge through the death overs.

The pressure through the middle from senior spinners Mackay (1-17 off her four overs — the season’s top wicket-taker, finishing with 20) and Amy Satterthwaite (a stunning 3-13) married with sharp work from keeper Laura Hughes to wrest back control of the innings.

Mackay had earlier made the initial breakthrough with Green’s wicket — after the introduction of Sarah Asmussen unsettled the opening pair. Then surefire Satterthwaite came on for her first, conceding just five from it, before the fall of Devine in the next over.

Both of Satterthwaite’s next two overs saw two wickets fall in consecutive deliveries. The tall WHITE FERN put herself on an unconverted hat-trick with an advancing Kasperek stumped cheaply and Rebecca Burns trapped in the 16th; then the big wicket of Melie Kerr – run out for 25 in the 18th, and sister Jess Kerr caught behind next ball for no score.

Conceding just 12 off their last three overs, the Magicians had ensured the Blaze had missed their chance to cash in and went to the break needing little more than a run a ball.

Kerr would have her revenge when Satterthwaite was caught for no score at 18/2 in the fifth – a wicket maiden, before her sister blew open the Magicians’ innings with her devastating 10th over.

Kerr’s first hat-trick for the Blaze had come against the Otago Sparks two seasons ago, but today’s came in the cauldron of a Grand Final as she ripped out three wickets with her magic wrist, starting with the big wicket of Mackay (24) with the third legitimate delivery of the over.

Mackay was swiftly followed in by Kirsty Nation and Emma Kench — all bowled by Kerr’s lethal wrong ‘un as she became the first player in the league’s history, men’s or women’s, to take two hat-tricks in a career. It was just the fourth hat-trick in Blaze’s T20 history.

But ecstasy would turn to agony for Kerr in the same innings.

Brilliant with the ball, a crucial one-handed misfield from Kerr allowed Ebrahim to pick up a crucial boundary off Devine in the penultimate over.

That over had begun in Blaze’s favour, the Magicians needing 21 from the last 12 balls of the Final. Devine conceded just three singles from her first three deliveries, the pressure going up for the seasoned Ebrahim and her free-swinging partner Tahuhu.

After the misfield rolled over the rope to ease the tension, Ebrahim put Devine’s next delivery to the fence to suddenly slash the equation to 10 from seven.

The drama of the 19th continued when Ebrhaim slammed Devine’s last delivery back to the bowler who then missed a big runout opportunity with Ebrahim well out of her ground.

Now the Magicians needed nine from six off the spinner Kasperek, back at last in this match from a shoulder injury. Ebrahim swept away the first for a single before Tahuhu blasted her third six, straight back over Kasperek’s head to leave two required from four balls.

Tahuhu turned the strike over to Ebrahim who did the honours with two balls to spare, finishing with an unbeaten 40-ball 45* as the rest of the Magicians screamed onto the pitch to celebrate their first T20 title since 2015/16.