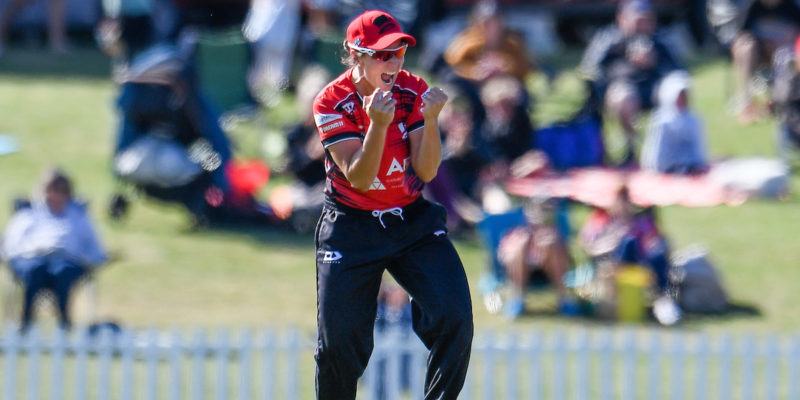 Out of the running, but not out of the contest. The Otago Sparks gave qualifiers the Canterbury MAGICIANS a timely reminder not to drop their guard in this southern derby at Hagley Oval.

The fun began with the very first delivery, Molly Loe dismissing Jacinta Savage for a diamond duck after the Sparks had elected to bowl. Her middle stump sent cartwheeling, it was a change-up that hadn’t come off for the hosts, Savage moving up to open while Frankie Mackay dropped down the order as they prepared to head into Finals mode.

Wickets would bookend the innings, from 0/1 to 132/8 when Gabby Sullivan was run out off the last ball.

In between, the Sparks had put together one of their best showings in the campaign, dismissing half of the strong Mags side for single-figure scores and containing the big guns Kate Ebrahim and Amy Satterthwaite to a relatively modest 22 and top score of 36, respectively.

Captain Mackay was left unbeaten after a quick 26*, perhaps already contemplating whether the gamble was worthwhile in a game in which the Magicians could snatch the all-important competition lead from Wellington Blaze.

Usual suspects Satterthwaite and Ebrahim had steadied the ship for the hosts with a 60-run partnership for the third, but youngster Loe struck another big blow when she came back for Ebrahim’s wicket and finished with 2-25 off her four.

No one in the Sparks’ attack went home empty-handed, Sophie Oldershaw also picking up a brace off her set of four with 2-20 in the middle to latter stages.

Now the Sparks required seven runs per over – a rare win on the cards if they could get partnerships cooking.

WHITE FERN pace weapon Lea Tahuhu put up a fierce effort with the ball, however, striking up front, Polly Inglis caught by Ebrahim in the third over at 10/1.

That brought Sparks WHITE FERN and captain Katey Martin to the middle with a chance to lead her side into a winning position.

Incumbent opener Bella James’s runout had the Sparks two down for 47 after eight overs, still needing seven per over but in good shape as long as they retained wickets.

Almost 13 overs in, Martin was still there in a 42-stand with Millie Cowan for the third – before Gabby Sullivan struck a massive blow for the Magicians with her second over: Martin caught off the last ball to halt a 36-ball knock of 42.

Savage quickly picked up another, but Cowan remained as the final two overs boiled down to a run-a-ball chase.

But with just seven needed from the last nine balls and having just celebrated a vital, 37-ball 50 in her 50th T20 appearance, Cowan was dismissed in unlucky fashion: stumped after a fumble from Canterbury keeper Laura Hughes, the ball bumping off her body straight onto the sticks.

Six from six was still needed as captain Mackay took the ball to bowl the tense last. Singles were picked off the first two balls before Gemma Adams tried to loft the ball further – only to send the catch straight into the hands of a waiting Satterthwaite.

Eden Carson joined Olivia Gain who was now on strike, four from three the equation.

Two slashes, two dot balls. Now the Sparks needed a pressure boundary from the last delivery, no option for Gain but to swing hard. But again the fielder was waiting, Ebrahim this time gobbling up the catch as the MAGICIANs escaped with a warning.

Now, they were ahead of Wellington Blaze, holding the number one spot and the box seat in the race for direct entry to the Grand Final.