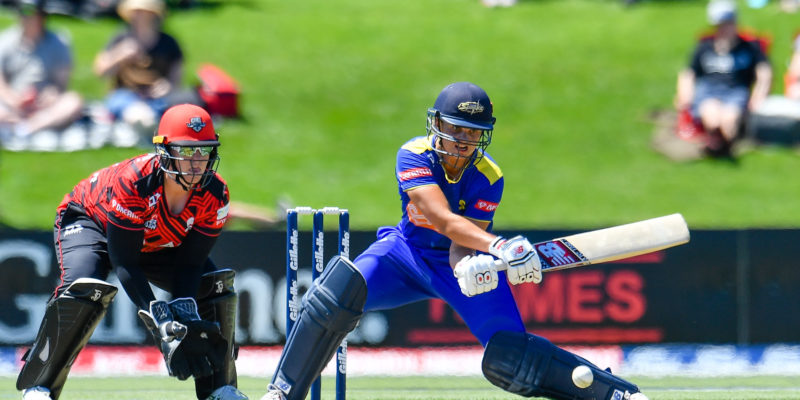 Boxing day cricket returned to Hagley Oval, and the home crowd turned out for a stunner of a day as the Canterbury MAGICIANS took on unbeaten Otago SPARKS for the first time of the season, falling just short against the strong visiting side.

MAGICIAN Jodie Dean debuted in her first Dream 11 Super Smash game of her career which saw her contribute with both bat and ball, bowling tidy spells and entering the tail end of the batting order with a cameo of 12 of 8.

Bates set out to the middle with fellow opener Inglis to face Satterthwaite opening the bowling and three MAGICIANS seamers inside the power play, building a 36-run stand for the first wicket. Glove-work from Hughes off Missy Banks’ bowling sent Inglis back into the sheds, bringing Katey Martin to the crease.

The @CanterburyCrick Magicians strike just before the end of the Power Play at Hagley Oval. Inglis gone after a good start. Katey Martin now with Suzie Bates for the Sparks. Follow play LIVE with @sparknzsport and @TVNZ 1. #SuperSmashNZ pic.twitter.com/hcA66Ygc4x

SPARKS looked to take the game away from the MAGICIANS as Bates and Martin put on a 70-run partnership for the second wicket, batting together unbroken for 10 overs before Jacinta Savage made the breakthrough, bowling Martin out in the 15th over to bring the MAGICIANS back into the game.

Missy Banks put the foot down, and the combo of Hughes and Banks again, sent a warm ‘welcome back to Hagley Oval’ to danger-woman Kate Ebrahim, scalping the ex-MAGICIAN for just one run the following over.

Further tight bowling from skipper Mackay and our MAGICIANS dried the SPARKS run rate. Suzie Bates walked across her crease in the 18th over trying to make something happen and Banks followed, forcing Bates to clip the ball onto her stumps, ending her knock of 47 and Banks had her third scalping of the day.

Nat Cox put the pressure on fielding in the deep, chasing the ball down on a fast outfield and creating a ripper of a runout in the 19th over, dismissing Blakely to keep the SPARKS unsettled.

SPARKS collected another 16 runs off the last two overs of the game with the help of a last ball six from Olivia Gain to set a par score of 136/5. Missy Banks took 3/22 off her four overs, Savage with 1/25 off three overs, and Mackay had the most economical bowling of the day only going for 16 runs off her four overs.

The MAGICIANS run machine needed 137 runs to beat the unbeaten Otago side, and the experienced Amy Satterthwaite and Nat Cox were sent out to set the foundation. They took control of the power play conformably thanks to some quick boundary hitting from Satterthwaite.

The 40-run opening partnership was cracked when Satterthwaite found herself too far down the wicket to young spinner Carson and keeper Martin took her bails off, ending her opening knock of 23 off 19.

Nat Cox anchored the batting innings again, batting around the falling lineup as the team struggled to look for scoring partnerships as Mackay, Savage, and Nation all fell for under 10 runs. Cox top scored with 37 from 36 deliveries and was dismissed in the 12th over, unable to keep a delivery out, knocking over her stumps.

Nat Cox on early in the chase for @CanterburyCrick at Hagley Oval. Follow play LIVE with @sparknzsport and @TVNZ 1. #SuperSmashNZ pic.twitter.com/nk4NPNJczL

The required run rate of 6 an over after the power play crept up to 9 an over, then 11, and cameos from Gerken (13) and Dean (12) weren’t enough to get the MAGICIANS over the line, finding themselves all out in the 20th over for 124, missing out by a mere 12 runs.

A blinding hiss and roar to start the run chase off, left not enough in the tank for our MAGICIANS facing a strong Otago bowing attack. The game was never out of arms reach and the MAGICIANS proved they’re worthy of contending with top of the table teams.

The Canterbury MAGICIANS next meet Central Districts for the second time in Pukekura Park, New Plymouth on Friday the 31st of December. All the action can be found LIVE on Spark Sport.

The home side next plays at Hagley Oval on the 18th of January taking on the Auckland HEARTS, and then face the Northern BRAVE on the 21st. Tickets are available online NOW!