MAGICIANS do the double! 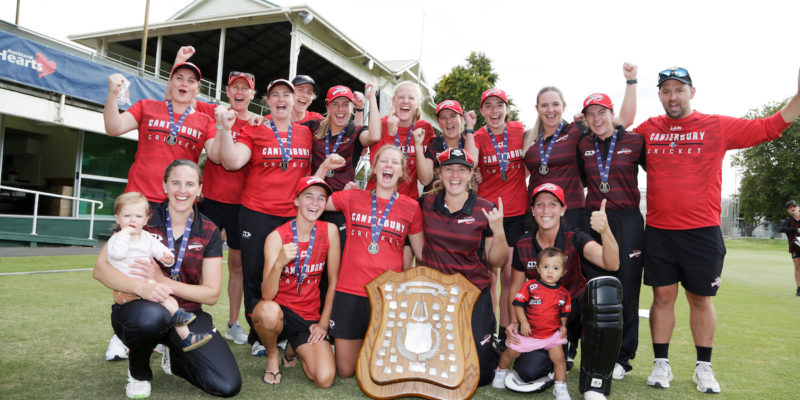 The same day that Canterbury won the Plunket Shield with two rounds to spare in Rangiora, the Canterbury Magicians got the HBJ Shield back.

Holly Huddleston will have been determined to mark her 100th one-day cap match for the Hearts in style – the WHITE FERN needing just one more wicket to become the Hearts’ leading wicket-taker across both formats.

The match was also Huddleston’s 182nd List A appearance overall, heading in with 189 wickets.

Magicians captain Frankie Mackay meanwhile headed into the season decider having just surpassed 5000 List A runs in her record-breaking career, with 14 wickets from the regular season (behind only teammate Sarah Asmussen and Northern Spirit’s Eimear Richardson who both took 17), as well as being the third highest run-scorer of the summer with 361 runs at 45.12, behind teammate Kate Ebrahim (476 at 59.50) and Blaze’s Jess McFadyen (397 at 46.92).

Auckland Hearts captain Lauren Down elected to bat at Outer Oval, but the opener would become the first to depart at 35/1 when she was caught behind off Gabby Sullivan on 19.

The Magicians soon had three big early wickets, Sullivan picking up both Down and the woman who scored her maiden century in last year’s Grand Final, Arlene Kelly – and all departed cheaply.

Nat Cox had meanwhile collected a simple catch off Kate Ebrahim to have opener Saachi Shahri walking back in early as well with the Hearts off to a wobbly start at 52/3 in the 14th.

Now senior players Katie Perkins and Huddleston had a big recovery job to do together for their side – with Perkins going on to reach a much needed half century for the Hearts.

But the wickets kept tumbling at the other end, and the Hearts were put under pressure throughout the innings.

An unbeaten 29* from Regina Lili’i helped the Hearts scramble up to a total of 185, but the side was unable to bat out their full allocation, Amy Satterthwaite – who had already taken a return catch to snare the key wicket of Katie Perkins – adding another three late strikes to wrap it up with just over two overs to spare, finishing with 4-27 off her 8.5 overs.

It was just the beginning of a very good day for the Canterbury star.

Early wickets were crucial for the hosts if they were to stop the strong Canterbury Magicians top order from stealing a march in the chase – and Kelly delivered with her first strike in the 16th over, the Magicians 13/1 after losing Emma Kench.

With 30 overs to go, the Canterbury Magicians needed just 114 runs at 3.8 per over, still with nine wickets intact.

Satterthwaite ticked off her 9000th List A run shortly before posting her half century, Frankie Mackay following soon after with her own half ton in their calm century stand.

It was a masterclass in concentration given the fanfare of the ajacent Blues-Crusaders rugby match on the main ground, but Mackay would carry her bat throughout the chase.

Huddleston was still searching for her first wicket as she came back in the 31st over to try to crack the partnership, Kelly brought on at the other end.

Fittingly however that brought Canterbury’s top run-scorer this season, Kate Ebrahim, to the middle to finish the game, and the season in which they did the double, with the winning boundary a short time later, the Magicians doing it in style with 12.2 overs to spare.