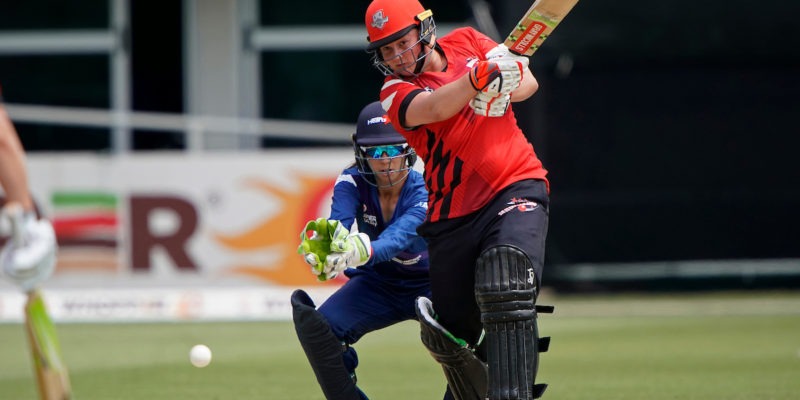 The Magicians were superb with the ball and in the field in the first half of the match, not allowing the Hearts to get away and keeping them to just over 100 batting first. Jacinta Savage and Erin Bermingham bowled with great accuracy and the fielding backed them up as the Hearts batting could not make use of what was a fine batting surface.

Skipper Frances McKay and Kirsty Nation then continued their fine work from the previous match against the Volts, putting on 55 for the first wicket and setting the platform in the run chase. From there, Erin Bermingham and Kate Ebrahim finished things off as Canterbury got home with 14 balls to spare.

Earlier in the day, Frances McKay won the toss and inserted Auckland into bat on a very good batting surface and quick outfield at the Eden Park Outer Oval.

The Hearts however struggled to get out of first gear in the early stages and it turned out to be the theme of their innings.

Pace off the ball looked to be an appropriate strategy with no grass on the wicket, and the Magicians were very tight with their line and lengths early on. Erin Bermingham bowled with a lot of control, gathering a bit of turn away on a good length and it very nearly brought a wicket in her first over. A tight single saw Anna Peterson saved only by a slowly dislodged bail when Laura Hughes gathered the throw, however an action replay in her next over saw Lauren Down run out.

The introduction of Jacinta Savage saw Canterbury apply the screws and she was rewarded when Maddy Green was bowled playing across the line. Savage kept to a simple line and good length, and varied her bowling with off-cutters, making it difficult to get away, as the Hearts reached 44/4 at the mid-way point.

After Bermingham had Regina Lili’i caught at cover, the Hearts were struggling at 62/5 in the 15th over. It was only until the introduction of White Ferns’ all-rounder Holly Huddleston that the innings gained any momentum. She looked more accomplished against the pace of Jess Simmons and Kate Ebrahim, turning the ball over consistently and scoring two boundaries in the process. Her unbeaten 36 ensured the Hearts would score 104, but the score was still well below par.

McKay marshalled her fielding unit expertly, ensuring the bowlers bowled to the field, and it meant the Hearts could only muster six boundaries in their innings, consistently finding the boundary fielders. This showed especially when the ball was pitched full. Apart from one dropped catch and a couple of run-out chances, the Magicians’ fielding was on target and they claimed three run-outs in the process.

Despite the low total, Auckland would have been slightly optimistic after defending the almost exact same score at Lincoln a few weeks’ back in the teams’ last clash.

However, McKay and Kirsty Nation picked up where they left off against the Volts in the last round, taking on the Heart’s bowlers from the very start and showing the pitch to be a true surface.

Both openers looked especially strong driving the ball, hitting through the line and punishing the Auckland bowlers when they went too full early on, especially with little to no swing on offer.

McKay looked in the mood to attack, driving Roz McNeill for three straight boundaries in the fifth over, taking it for 14, while Nation also looked positive square of the wicket.

Peterson’s spin nearly brought the first wicket, as she dropped a tough chance off her own bowling when Nation drove the ball straight and hard at her off a full delivery.

After Canterbury brought up their 50 in the 9th over, Peterson returned to pick up the first wicket, when she had McKay lbw off a reverse-sweep. The sole spinner in the side, she claimed a superb return off 2 for 13 off her four overs, happy to flight the ball when required, and eventually claimed Nation’s scalp with a caught and bowled in her second effort. It was surprising then that the Heart’s didn’t have a second slow bowler in the side, with the pitch suiting the spin option more as the game wore on.

Bermingham and Ebrahim then combined at the end, putting on 27 off 26 balls to usher Canterbury comfortably towards the target and seal a comprehensive victory.