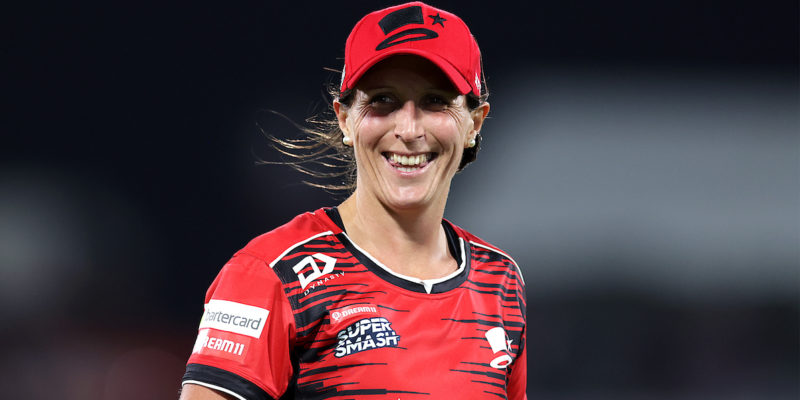 Kate Ebrahim made sure the Canterbury Magicians’ first ever match under lights was one to celebrate for the home team.

The 53-run win against Northern Spirit at Hagley Oval was the first ever women’s Domestic game under lights in New Zealand, and experienced Ebrahim led the way with the bat with an outstanding knock for the hosts.

Frankie Mackay had won the toss and batted, but after Spirit grabbed four key wickets in the first nine overs, things were in the balance somewhat at 54 for four.

But Ebrahim had joined the action in the fourth over, and would stay at her post until the final delivery for a superb unbeaten 84* off just 65 balls — the veteran’s highest T20 score yet.

Special night for this lot at Hagley Oval this evening!

First women's domestic game under lights done and dusted. Great to top it off with a win too! #WeAreCanterbury #SuperSmashNZ pic.twitter.com/Syxb1pVS1a

Peppered with her power-packed cover drives and supplemented with late support from Kirsty Nation (21* off 17), Ebrahim got the Mags through to a total of 154 for four — and that would prove enough after they backed it all up with one of their sharpest performances yet in the field.

Four runouts characterised the Spirit’s doomed chase, and two of those came from the arm of youngster Missy Banks who inspired her teammates in the field.

With her first delivery, Banks then produced one of the wickets of the night with a big in-swinger to bowl Nensi Patel, the Magicians already well on course for their third win in four games to go second on the table, equal on points now with the Hearts but ahead on their turbo-boosted net run rate.

For the Spirit, Kate Anderson top-scored at the top with 38 (31) in a 55-stand with Katie Gurrey (29 off 34), but their departure signalled a death spiral for the visitors in the face of relentlessly fierce fielding.

Sarah Asmussen enjoyed her first Smash of the summer with 2-21, crucially removing Gurrey as well as running out Eimear Richardson.

Fittingly it was a runout that wrapped it up in the last over with only one ball to go, Spirit all out and outclassed on the night for 101.