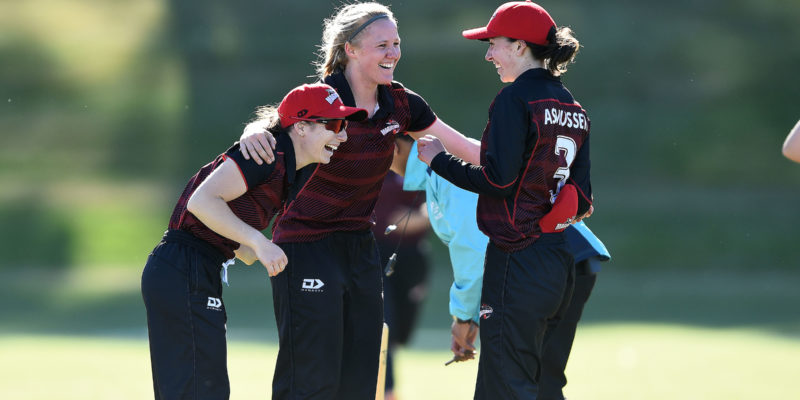 Twin tons to senior players Frankie Mackay and Kate Ebrahim – in her comeback match after a year off for maternity – ensured a total that would be too much for the Sparks to chase down.

The southern derby began with Sparks captain Bella James asking the Magicians to bat first, but despite the loss of an early wicket it wasn’t long before record-breaking Canterbury captain Mackay was in charge in the middle.

Mackay took her record Canterbury Magicians century tally to 13, closing in on the international record for most women’s List A centuries for a single team which stands at 14.

After a 50-run second wicket stand with Emma Kench, she joined forces with Ebrahim for a colossal 240-run stand for the third wicket.

Another record, shattered. The previous Magicians record for the third against any side had stood at an unbeaten 168* between two WHITE FERNS captains in Amy Satterthwaite and Haidee Tiffen in 2007/08.

Not only that, but Mackay and Ebrahim had just crunched past the Magicians all-wickets record, beating the mark set for the second wicket by Debbie Hockley and Nic Payne at the start of the decade.

Mackay contributed 119 of the runs as she raced towards her half century off just 60 balls and then raised the ton off 131, including 14 boundaries.

The pair already had a century stand before Ebrahim reached her own fifty off 76 balls, ultimately picking up the pace and reaching her hundred off 106 balls (11 boundaries, two sixes).

For the strong former WHITE FERN it was just her fourth List A century, and second for the red and blacks in a brilliant return to the game following the birth of her daughter.

Ebrahim would finish the innings unbeaten on 106 not out and despite having chipped out a couple more wickets – debutante Saffron Wilson (2-49), an ex Nelson and Central Districts Under 19 rep, picking up her first two wickets, the young Sparks faced a big mission in the chase at Centennial.

Jacinta Savage (2-47) picked up both Sparks openers inside the first nine overs at 55 for two, but Caitlin Blakely and Polly Inglis fought back with a 71-run stand for the third wicket.

However it was always destined to be overshadowed by their opponents’ effort and when Inglis (39) was stopped by, who else, Mackay in the 28th over, it left Blakely holding the fort.

She lost a succession of partners until Blakely herself became the seventh to fall after a gutsy 78 – run out by Gabby Sullivan.

The result was never in question with the Sparks reaching 213/8 but still a long way from happiness after the Magicians’ 321 for four set up a comfortable victory.

It was, after all, just Canterbury’s second highest team total of all time (behind only the 425/6 set by the Magicians against Pakistan in 1996/97 at Garrick Park), and their highest ever in the Hallyburton Johnstone Shield.