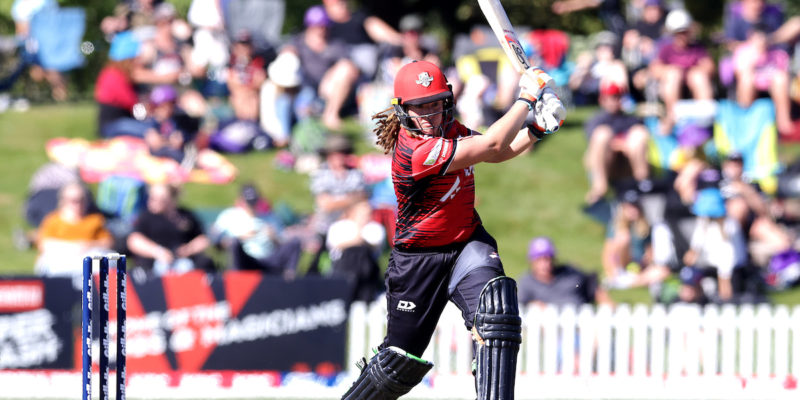 Applause encircled the chocker ground when the lights were flicked on at sunset, everyone had a smashing time, even though the KINGS could not grab the four points.

The KINGS gave it a fair nudge though, with Daryl Mitchell – fresh off his maiden Test century – shining under lights on T20 debut for the Canterbury Kings.

He punched 76 off 46 balls even as dew began to condensate on the outfield, and it was all the more an important knock given the KINGS had lost both their openers bang-bang in the first few balls of the chase to be on the back foot early at 2-1.

So there was Mitchell, and for a while Jack Boyle before steady captain Cole McConchie replaced him, trying to deliver for the big home crowd as they went after the Stags’ total of 186 for five.

But it was a big chase in the conditions. Stags captain George Worker had won the toss and, coming off his maiden T20 century two days earlier, again got his side off to a healthy start with a run-a-ball 31.

He formed a 79-stand for the second with Will Young who totted up his second half ton in two games, reaching 68 off just 43 balls.

It was Young who stood in the way of the KINGS’ dream match, in control and batting until the 15th over.

The KINGS had Matt Henry (2-32) and he started brilliantly with a stinging caught-and-bowled to dismiss Dane Cleaver for no score. But the Stags batted deep and the big hitters just kept coming.

Josh Clarkson (26 off 15) and Bracewell (an unbeaten 37* off 16) provided the turbo-charge at the death to set the Kings a challenging ask under lights – a chase that was made more difficult when Bracewell had Chad Bowes caught by Ross Taylor first ball of the innings.

Bracewell then removed the Kings’ other opener Ken McClure for no score five balls later, but Mitchell’s composure, peppered with eight boundaries and a six, saw the Kings climb past the required asking rate through the middle stages of the innings to make the Stags sweat.

The Stags fought back, however, with Blair Tickner breaking the dangerous 91-run stand between Kings captain Cole McConchie (28 off 27) and classy Mitchell, before allrounder Clarkson took the crucial wicket of Mitchell in the 16th over, after which the visitors were back in control.

Earlier, the Canterbury Magicians had brushed aside the Central Hinds by eight wickets to effectively end the Hinds’ campaign early.

The injury-hit national one-day leaders chalked up their sixth straight T20 defeat in co-captain Jess Watkin’s 50th game while MAGICIANS skipper Frankie Mackay strangled them with an outstanding, career-best haul of 4-10 off her four overs.

Mackay then narrowly fell short of what would have been a 15th T20 half century when she was caught on a 33-ball 48 in the chase. WHITE FERN Amy Satterthwaite (29* off 20) and Kate Ebrahim (15* off 13) carried on her momentum to steer the MAGICIANS home, chasing down the Hinds’ 100/9 with seven overs to spare.

The win pushed the Magicians up to 10 points in the competition sitting fourth on the table.