Mackay on the Cusp of a Century 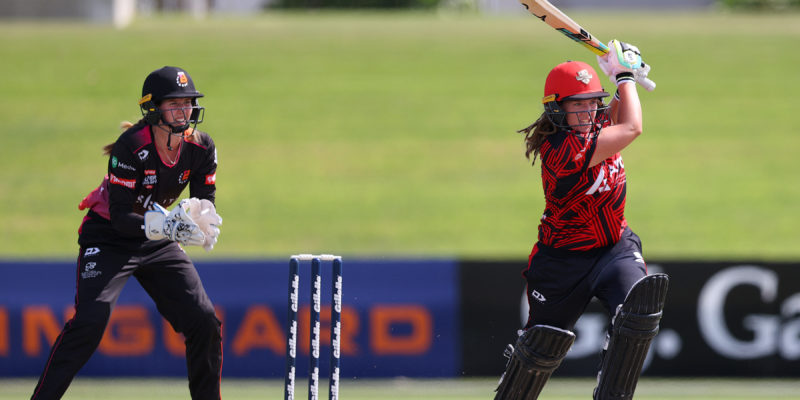 The Canterbury MAGICIANS and KINGS travel to picturesque Pukekura Park for round 6 of the Dream11 Super Smash to play against the Central HINDS and STAGS on New Year’s Eve.

MAGICIANS Captain Frankie Mackay is poised to play her 100th T20 game for Canterbury, in a career that has spanned just short of 14 years.

Mackay’s T20 record for Canterbury is undeniable – 99 matches, 14 fifties and an average of just over 35 with the bat, along with 104 wickets, an average of 17.16, and an economy rate of 5.15 with the ball, Mackay has been a crucial part of the MAGICIANS set-up for over a decade.

Speaking of the achievement, Mackay said,

“I’m really proud to be bringing up 100 t20 games for the Canterbury Magicians. To be the first person to play 100 T20s for Canterbury and the first to do it in the competition will be a really special moment.”

“I have a lot of really fond moments across my t20 career. I can vividly remember my first game, the t20 format was also the first time I got to captain Canterbury, scoring 97 at Hagley was something I never thought would happen and I’ve loved the thrill of being able to bowl plenty of last overs in tight games – but I’m sure they have taken years off my life.”

“To be part of 5 title winning sides has been amazing and last years win at the basin is one of the most special games I have been a part of.”

“Massive thanks to all my teammates, family and friends who have been a constant support and thanks as well to all the coaches who are nursing sore shoulders!”

“The t20 format is one that stated my first year playing for canterbury in 07/07 and has constantly changed and evolved since then, it’s the one that has challenged me the most so I look back with pride at the successes I have had and feel a real sense of achievement at bringing up 100 games and look forward to seeing what the Magicians can do it the future in this format”

Henry Nicholls and Matt Henry head away and join the BLACKCAPS for their upcoming home test series against Bangladesh. While it is a shame to lose them, it gives opportunities to batter Mitch Hay and seam bowler Will O’Rourke to come into the side.

Hay has already impressed so far this season, playing a vital cameo role (29 off 16) against Central Districts at Hagley Oval earlier this season to help guide his captain to a T20 career best of 84.

“Mitchy has impressed early on in his Super Smash career. He played a really good innings against Central Districts at Hagley Oval and has looked like he belonged at this level.”

When asked if fans would see the debut of promising seam bowler Will O’Rourke, Fulton said,

“We have been going ‘horses for courses’ so far in this campaign and it has generally worked so far. We’ll have to wait and see what the wicket looks like when we get up there but I’m sure we’ll see Will O’Rourke get on the park at some point this season.”