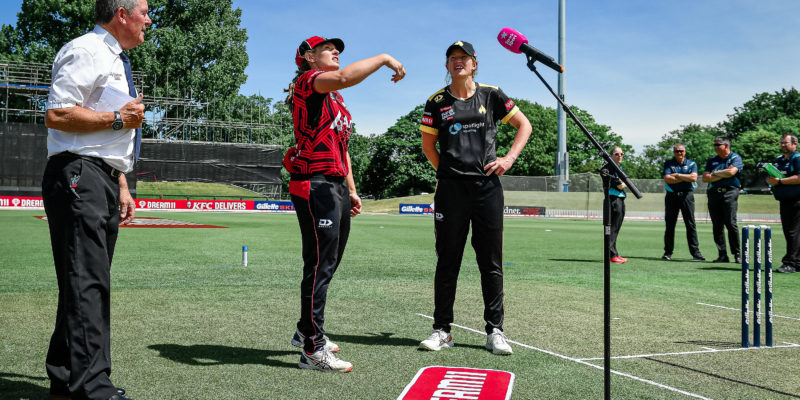 Frankie Mackay brought up her 100th T20 wicket in the opening clash against Wellington Blaze, who ended victorious in a do-over of last season’s Grand Final.

Winning the toss and electing to bowl on a flat and hard surface, the Canterbury MAGICIANS put the Wellington Blaze into bat in the opener of the Dream11 Super Smash.

Plimmer was off to a roaring start, hitting four boundaries in the second over putting the MAGICIANS under the pump.

Missy Banks made a breakthrough in momentum, scalping opener Rebecca Burns for just one run in her second over chipping one to mid-off Jacinta Savage at mid-off.

Enter Amelia Kerr. She blazed through her innings to 71 off 55 balls with the help of a 31-run partnership with opener Plimmer, before Missy Banks took a diving catch forward at mid-on to dismiss the young opener for 34.

Kerr’s 81-run partnership with fellow Blaze veteran Leigh Kasperek was vital to her dominant innings, as Kerr and Kasperek danced around MAGICIANS bowlers. A 180-run chase looked on the cards, before two tight overs from Savage and Simmons pulled the two in-form batters back.

The duo of Frankie Mackay and keeper Laura Hughes started a flurry of wickets in the 19th over, with quick glovework behind the stumps from Hughes dismissing Kasperek for 28 off 26, breaking the dominant 81 run partnership with Kerr.

The glovework continued, and Hughes dismisses Thamsyn Newton the very next ball sending her back to the sheds for a golden duck and completing Frankie Mackay’s 100th T20 wicket for Canterbury Satterthwaite sealed the team hat-trick the following ball, finally ending Kerr’s damaging innings with an over-the-shoulder sliding backwards catch from Nat Cox in the deep in the final over.

The Wellington Blaze finish their innings 145/6, with Frankie Mackay the pick of the bowlers with 3/23 off her 4 overs with the cheapest economy rate, and Satterthwaite, Asmussen and Banks taking one a piece.

Cox and debutant Gerken set out to start the MAGICIANS off with the bat, the later falling victim to left-arm seamer Singh shaping one into Gerken’s off-stump on her first T20 delivery. Cox departed in the second over cheaply, pumping a ball off to cow-corner but watched it hold up and getting caught in the deep.

Experienced Satterthwaite and Mackay were set with the task to rebuild, and after a maiden over from Kasperek leaving no room for Mackay to get going, Satterthwaite took to the opening left-arm seamer Singh, hitting three consecutive fours in the 5th over.

Amelia Kerr was brought into the bowling attack, and immediately disrupted the momentum Satterthwaite was building, bowling her around her legs in a wicket maiden over.

Jacinta Savage joined Mackay out in the middle, and started a 37-run partnership, the highest of the innings, trying to get a run chase back on track. MAGICIANS were 53/3 after 10 overs, needing 9’s an over to win the game.

Blaze bowlers Newton and Kerr came into the attack and quickly went through the MAGICIANS middle order, leaving no room for partnerships to build. Savage edged one sky high against Newton, to which she made 20 meters of ground to take the catch safely, bringing the Savage and Mackay partnership to a close.

Kerr took the scalp of fellow WHITEFERN Lea Tahuhu who was in the side as a batter, chipping one onto her stumps for a second ball duck. Banks and Hughes fell cheaply next within the space of an over, leaving a tough ask of lower order batters to partner with set Mackay to get the MAGICIANS over the line needing 67 runs to win off the last five overs.

A slim 15 run partnership between Mackay and Simmons wasn’t enough, and the MAGICIANS found themselves all out for 101 in the 19th over. Mackay top scored with an unbeaten 41* off 45 balls.

Amelia Kerr finished with figures of 4/12 off her four overs, and alongside a knock of 71 made her a worthy Dream11 Game Changer recipient.

The defending champion Canterbury MAGICIANS next face the Central Hinds at Hagley Oval on December 11th in the second home double header on Spark Sport. CLICK HERE FOR TICKETS