Latham ton in vain as Stags prevail in run-fest 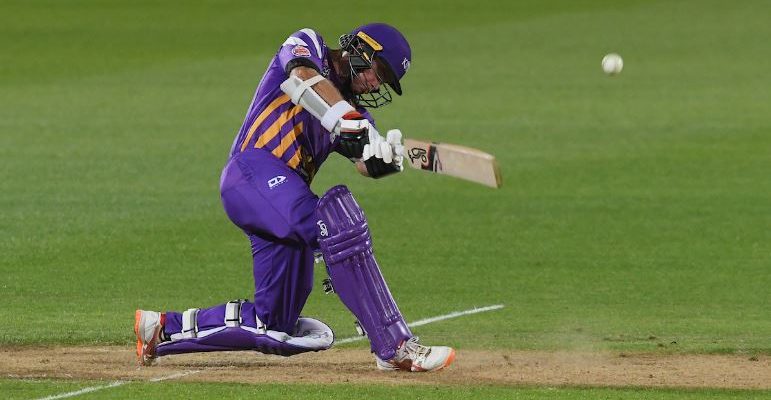 Tom Latham lit up the Napier night with his first T20 century and the first of the 2018/19 Super Smash tournament, however it wasn’t enough to combat the initial Central Stags onslaught, as the Kings went down in a high-scoring contest by 18 runs at McLean Park last night.

Latham’s high-class knock was in response to the brutality of the Stags, who had earlier scored an imposing 225 on a pristine batting deck. Latham and skipper Cole McConchie cut loose in a century stand which tested the Stags’ bowlers and briefly kept the Kings in the chase. However, at the end there was simply too much to do in too little time and they fell just short, though passing the 200-mark themselves in the process.

The Stags had earlier sent down the gauntlet with a belligerent 20 overs briefly held up bizarrely by a distraction from the sun. That natural light stoppage didn’t deter them however, as half centuries to captain Tom Bruce, Will Young and Dean Foxcroft led the way while Kyle Jamieson was impressive again with his lengths, taking 1 for 34 and staying on top as the leading wicket taker in the competition (14).

The Kings stay in last spot (1-6) and will regroup for a contest with the Aces next Saturday back home in Christchurch, taking some encouraging signs from their batting effort.

A typically flat, hard pitch was in focus for the contest and Bruce had no hesitation after winning the toss and batting first. Matt Henry continued his great form, having George Worker caught behind, Latham dropping the gloves and taking a sharp catch at first slip.

After that, however, it was one-way traffic. Young carried his bat and in partnership with Foxcroft, added 109 for the second wicket off just 65 balls as the Canterbury bowlers struggled with their lengths. Anything full was punished accordingly while better deliveries were those bowled into the wicket, as Jamieson was able to execute when Foxcroft was finally dismissed for 50 off 36 balls.

It didn’t get any better however when Bruce joined Young and the two proceeded to compound the misery on the Kings attack, smashing the ball to all parts of the park in a 107-run stand for the third wicket off 47 balls. Seven maximums were scored with Bruce especially brutal, clubbing 71 off 30 balls and going to the top of the batting run charts (287) whilst Young remained unbeaten on 89 off 50 balls. The end result was a tough outing for the Kings, who would need a mammoth 226 to win.

Latham would have been wary starting out in the chase, having made two first-ball ducks in his last three innings, but knowing it would be his last knock before returning for the Black Caps at the same venue next week.

After Chad Bowes was dismissed early, scooping a length delivery from Seth Rance to square leg, Latham and Henry Nicholls looked to steady the direction, putting on 53 for the second wicket off 39 balls. Nicholls was just getting into his stride, sweeping Ajaz Patel over mid-wicket for six, before looking to repeat the same treatment and finding himself caught on the square leg boundary.

With 169 needed off 76 balls at nearly 13 runs per over, it was looking dire for Canterbury however McConchie’s arrival at the wicket saw the tempo of the chase change completely. The captain looked especially comfortable against the spin of Patel, serenely hitting him over mid-wicket for two sixes at different junctures to really get the innings moving and sending him up to third on the batting charts with 221 runs this season. Latham meanwhile played well on pretty much all sides off the wicket, pulling especially well while lifting Rance for a composed drive over long-off for six. They then really made their move as one Patel over was taken for 24 including three sixes as the Kings threatened to make a comeback.

Their 107-run stand off 51 balls was finally ended when Blair Tickner, who had earlier been taken to by McConchie behind the wicket, finally got his man as McConchie went for a pull over mid-wicket but could only succeed in finding Bruce in the deep. 62 off 25 didn’t seem impossible and Latham would bring his century up not long after off 57 balls, with nine fours and five sixes, and would be the third in Kings’ history.

The run rate would eventually get out of hand and he was finally dismissed in the last over after a marvellous innings. The Kings would ultimately fall short, but not before showing their capabilities with the bat in another tough encounter for the bowlers, as they notched up their most sixes in a T20 innings (9). They now have a few days to re-group for their next match against the Aces.