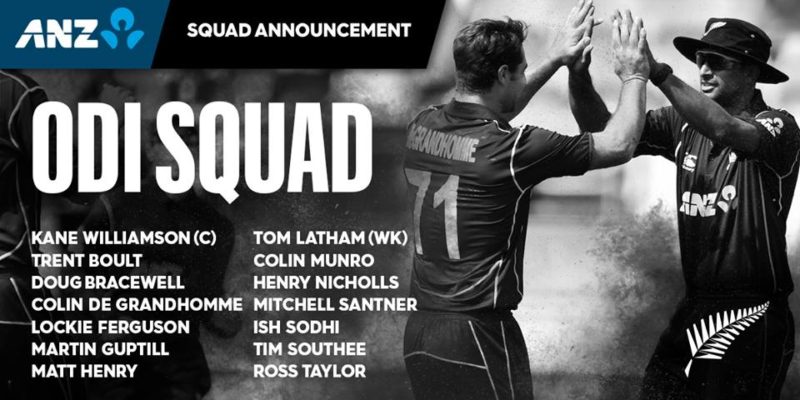 The BLACKCAPS have welcomed back Mitchell Santner, Colin de Grandhomme and Tom Latham for the first three games of the five-match ODI series against India, starting in Napier next Wednesday.

Coach Gary Stead said the composition of the squad reflected the selectors’ desire to keep their options open ahead of the World Cup, while still giving themselves the best possible chance of winning the upcoming series against Virat Kohli’s tourists.

Todd Astle (knee) and Jimmy Neesham (hamstring) have not been included in the initial group of 14 and have been asked to prove their fitness in the Burger King Super Smash before being considered for the final two matches of the series.

Latham and de Grandhomme both sat out the Sri Lankan white-ball series, while Santner – who last played an ODI for the BLACKCAPS against England in Christchurch last March, produced a solid performance in last Friday’s one-off T20I against Sri Lanka at Eden Park.

Doug Bracewell, another to impress under lights on Friday evening, retains his place in the ODI squad, having not played in any of the three 50-over games against Sri Lanka.

“Our two main priorities have been to select and prepare a squad capable of winning what is shaping as a massive series against India, and gathering as much information as possible ahead of the ICC Cricket World Cup in England and Wales,” said Stead.

“Tom and Colin are experienced players in this format and will offer quality in their respective roles, and Mitch and Doug showed us what they are capable of during the T20 on Friday night.”

Stead said that, all going well, Neesham and Astle would join the squad for games four and five.

“We were impressed by Jimmy against Sri Lanka, and are keen to see more of Todd – who has a different skillset and performed well for us last year.

“It’s just important that, after their respective injuries, we can see them playing again and be confident of bringing them back at this level.”