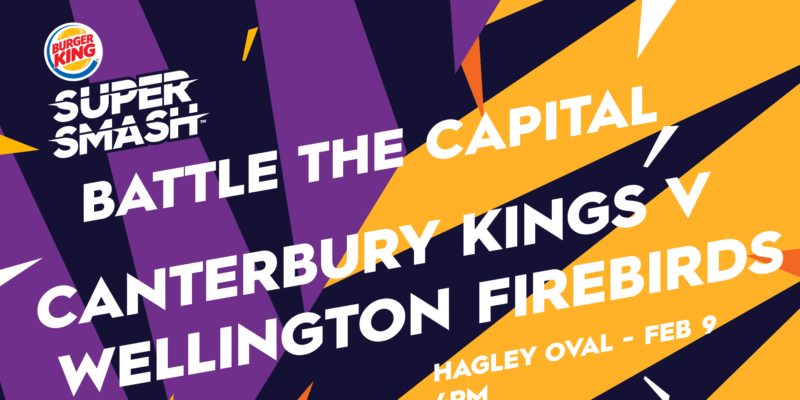 Joining us at Hagley Oval on Saturday? Here’s everything you need to know!

Beat the queue and buy your tickets online https://www.ticketdirect.co.nz/event/details/190624/canterbury-kings-v-wellington-firebirds

Any junior cricketer that turns up in their club cricket top will get FREE entry on Saturday.

PLAYERS TO WATCH OUT FOR:

THE LAST TIME WE PLAYED THE FIREBIRDS:

Jan 6, 2019 –A powerful Firebirds team performance built on aggressive batting from Michael Bracewell and Adam Hose, four wickets on T20 debut for Ben Sears and some extremely sharp fielding got the Firebirds the win in front of over 3000 Wellington fans.

THE LAST TIME THE VOLTS PLAYED AT HAGLEY:

Jan 7, 2018 – Canterbury Kings put on 150 runs, with Chad Bowes top scoring on 41. Then it was Ed Nuttall who dismissed the powerful Luke Ronchi with a royal duck as he went on to make his best T20 bowling figures of 3-13. Jamieson also nabbed 3 wickets as the Firebirds eventually were all out for just 88 runs.

City Mission: Last year the Christchurch City Mission transformed the lives of almost 30,000 people across Canterbury. That’s almost 4 times the number of people it takes to fill the Hagley Oval!

Please show your support by bringing a can of food to the game on Saturday. Let’s help them feed those in need!

Grab your playing card on the gate, and if your “Super Smash Play” happens, make your way to the Cricket Express merchandise tent for a prize.

We will have our giant inflatables to the left of the entry gate. Bring the kids along and test out their own cricketing skills.

SPOON IT UP – Ice Cream

Pick up some discounted Kings Merchandise at the Purple Dynasty Sport / Cricket Express tent at the top of the Embankment. It’s our last game so grab a bargain!

Catch all of the Canterbury Kings and Wellington Firebirds players after the game to the left of the pavilion.