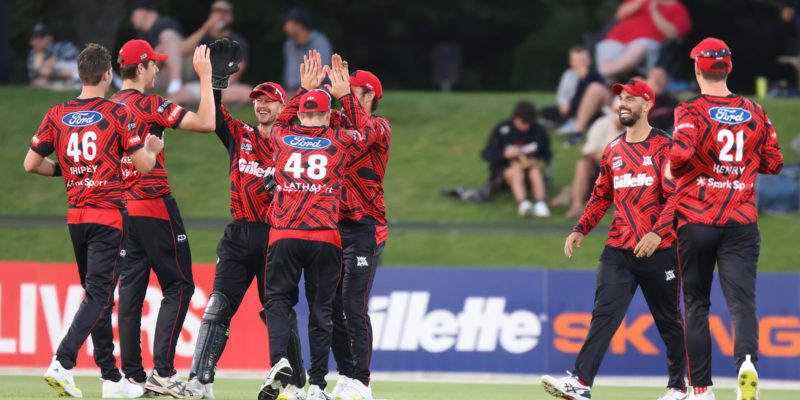 The Canterbury KINGS faced the Auckland ACES in a Tuesday night clash that saw our men victors over the visiting side.

Hagley Oval was a picture, sun shining, banks filling with a home crowd, and spectators treated to a Tom Latham special after being sent into bat when the visiting side’s skipper Robert O’Donnell won the toss and elected to bowl first.

THREE IN A ROW
Tom Latham in his groove back at Hagley!

And what a day to have a bat ☀️ Ticket sales still available at the gate!

Chad Bowes and Tom Latham, fresh off scoring a double century at the same ground just over a week ago for the BLACKCAPS, took to the middle to start the KINGS off. Bowes didn’t have the chance to get going, dismissed for just 2 runs as Will Somerville takes the catch just in between his fingertips.

Daryl Mitchell joined Latham at the crease and the BLACKCAPS duo put on a 49-run partnership, with Latham absolutely taking to ACES opener Ter Braak hitting 18 runs off the second over.

Latham’s strong start was cut short by Lockie Ferguson, given out LBW with no chance to go upstairs to overturn a suspected inside edge. Latham boasted a strong 34 from 19 deliveries and the KINGS were 52/2 after the powerplay.

Mitchell went on to score short partnerships with McConchie and Fletcher before teeing off on a full delivery that was caught in the deep by Chapman. Mitchell’s knock of 30 off 22 balls second top scored behind Latham.

HALFWAY WITH THE BAT

Cam Fletcher stuck in it, batting his way to the 15th over before being caught on the square-leg boundary to end his run-a-ball cameo of 22 off 20 balls. Henry Shipley showed more good form with the bat adding an innings of 21 off 20 deliveries to the total.

Canterbury KINGS were all out in the 20th over, putting forth a par score of 154 for the visitors to chase under lights.

Shipley and Henry opened the bowling attack and quickly found their edge over the ACES batters, drying them up of runs and taking early wickets to leave the ACES with their tail between their legs after the powerplay, losing three wickets for only 18 runs.

Ed Nuttall took the catch of the night, dismissing danger batter Glen Phillips in the 6th over when he sliced one straight up into the lights and Nuttall took a diving catch forward to send Phillips back into the sheds. ACES 18/3 after six overs with the bat looked very different to KINGS 52/2 after their opening six overs. Henry Shipley took 3/8 in his outstanding opening spell.

The Henry Shipley and Ed Nuttall combo remained on fire throughout the innings, combining again to remove ACES number three batter Chapman, this time Shipley taking the catch. ACES were 60/4 after 11 overs, leaving some serious work to do in the second half of the chase.

Tight bowling from Astle and young O’Rourke followed, with only the visiting skipper O’Donnell looking dangerous on the park bringing up a half-century in 34 balls. Nuttall removed the skipper as Mitch Hay took a good catch in the deep to bring his innings of 56 off 37 to an end. ACES 93/6 after 15 overs, needing 62 off 30 balls to win.

A last hurrah from Lockie Ferguson hitting a quick 30 off 19 balls with two sixes wasn’t enough and the KINGS secured an 18-run win over a strong Auckland side.

ANOTHER WIN AT HAGLEY!

The lads get the job done with an awesome performance with the ball. Henry Shipley the pick of the bunch!

The Canterbury KINGS are second on the competition’s points table, just two points behind leaders Northern BRAVE, and still have chance to finish top of the table with two more fixtures ahead.

The KINGS next play at home on Friday the 21st at Hagley Oval for a top of the table clash against leaders Northern BRAVE.

Tickets for the double header are ON SALE NOW!