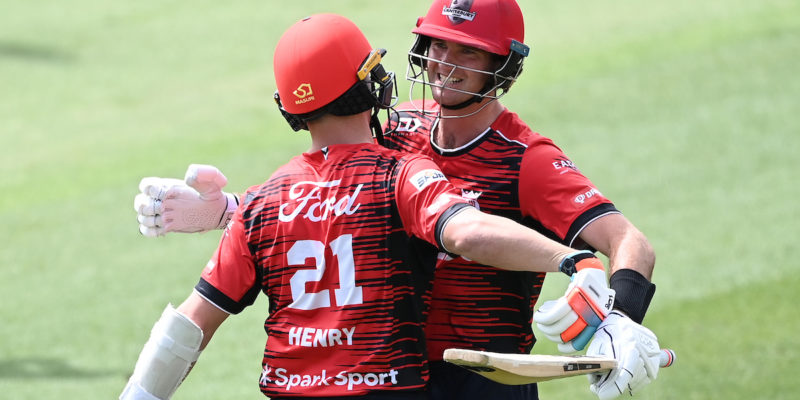 It was a fight to the death as the Central Stags and Canterbury KINGS took the 2021 Dream11 Super Smash Elimination Final down to the last two balls of the last over.

With the scores tied and the words “Super Over” on everyone’s lips, Doug Bracewell bowled to Matt Henry and lunged to his left as Matt Henry pushed for a quick single.

The ball brushed ever so close to Bracewell’s outstretched palm, a chance – and then gone, as the KINGS ran through for their first Grand Final appearance since the 2011/12 season.

It had already been a final over full of drama, with Cam Fletcher – on the cusp of his T20 career best with 72 off just 42 balls – run out by a millimetre after his partner had slipped over at the other end of the pitch.

The Kings’ hearts were in their mouths as Henry Shipley strode out to join Henry – himself fresh at the crease after kingpin Daryl Mitchell had been caught off Blair Tickner near the end of the 19th.

Their captain Tom Bruce had won the toss and batted on an overcast morning, but the team that had been all over the KINGS all season lost three early wickets inside the first six overs, including Ross Taylor for a two-ball duck as his Outer Oval hoodoo continued.

An Ed Nuttall bouncer had George Worker walking back in just the second over after he squirted a catch to Chad Bowes at point and Will Young found himself needing to steady the ship early while the red and black tails were up and wagging.

Young would be the key to the Stags posting a defendable tally with a smashing maiden T20 century. His innings – 101 off just 47 balls, peppered with 10 sixes and just one boundary for good measure, was an outstanding performance, under pressure to hold up his team.

He dominated the Stags’ scorecard, stringing together middling partnerships with the rest of order before he was finally run out off the last ball of the innings: textbook work.

It was just the sixth T20 century in the Stags’ history and eclipsed his previous best of 96, which had also been scored at Outer Oval. But even a total of 180 for seven at this ground is no guarantee of the desired result, and what difference a few more runs from the rest of his team might have made.

The KINGS bowled well. Henry opened tightly, then spinners Todd Astle and Cole McConchie did their job after coming on in the seventh.

The KINGS’ player of the summer Daryl Mitchell had just picked up two big wickets in three balls, Taylor and Dane Cleaver both caught, as they put the squeeze on.

But the brilliant Young was patient, and picked his sixes – putting Nuttall back over his head for a 24-ball 50, en route to his hundred off Mitchell’s last over.

The Stags then made an even better start with the ball themselves, with a tight runout of Chad Bowes by Tom Bruce coming off Doug Bracewell’s opening over and Blair Tickner striking in his first over, sitting on 7/1 after his first two-over spell.

However, Tickner would also split the webbing in his fingers, and when he returned for the 15th he had lost his fine line, blowing out for 14 runs and then, 18 off the 19th as Fletcher had belted him for two crucial sixes to ease the KINGS’ equation in a close chase.

It was a gutting finish for the league’s top wicket-taker of the season, but Mitchell and Fletcher were meanwhile calmy doing the business with a 132-run stand for the big fifth wicket.

It was easily a new Canterbury record for the fifth – a mark of 116 that had been shared by Fletcher and his captain Cole McConchie a few years earlier, and now they were delivering right when it mattered.

The Stags had their moments, Ajaz Patel having struck with just his second delivery to remove Leo Carter for a golden duck.

McConchie gone cheaply to the impressive rookie Joey Field. But their were also horror moments, just not Taylor’s day as he dropped Mitchell on the first ball of the 19th over, when 23 runs were still needed. Taylor redeemed himself just four balls later, but a further 12 runs had meanwhile rubbed salt in the wound, and gave the KINGS the boost they needed in the charge to finish line.

It was a close second for the Stags, who finish the season in third place while the Kings will look to go on to their first title since 2005/06.