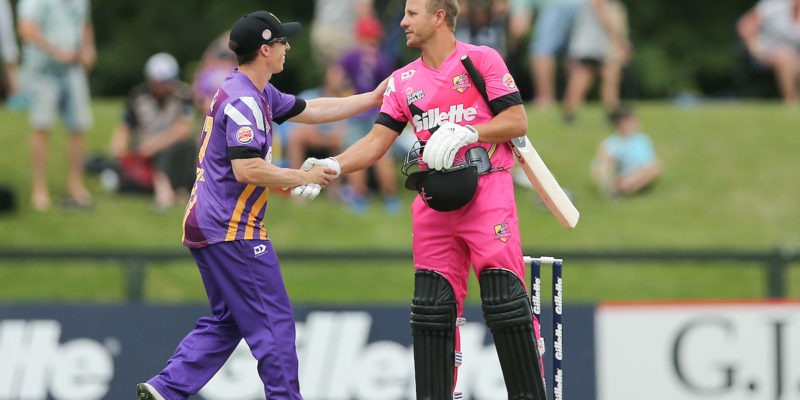 The Big Picture
The first Super Smash T20 match of the season at the Hagley Oval in Christchurch turned out to be a run-fest, but unfortunately for the home side it was the Northern Knights who prevailed in a tense contest, navigating a tricky chase of 194 to get home by two wickets with two balls to spare.

It consolidated the Knights’ lead at the top of the ladder, with four wins from five matches (16 points), while the Kings have some work to do heading towards the second half of the competition, currently in sixth spot with one win from their four games (4 points).

It was certainly a day for the batsmen. After Chad Bowes hit some form with an impressive fifty and Andrew Ellis provided the impetus in the middle order with a rapid 45 for a century stand together, the Kings stormed to 193 in their 20 overs. With the Knights facing a tall chase at the outset, a hard-hitting half-century from Brett Hampton kept Northern in the chase, while a superb cameo from skipper Daniel Flynn at the end combined with some useful late order contributions was enough to get Northern home in the last over.

The Kings now regroup for their next fixture at the same ground this Sunday against the Central Stags.

Bowes, Ellis lift Kings to competitive total
Earlier on, the Kings (1-2) lined up against a stacked Knights side (3-1) who were sitting at the top of the table going into this clash and had a number of current BlackCaps including Corey Anderson, Mitchell Santner and Neil Wagner to call upon for the match. The Kings for their part welcomed the return of Tom Latham, who had been rested for the recent one-day series against Sri Lanka and was raring to go on home turf.

With usual skipper Dean Brownlie sitting out with an injury niggle, stand-in captain Daniel Flynn won the toss and had no indecision about bowling first on another pristine Hagley Oval wicket. With the sun shining in Christchurch, the pitch was hard and flat, and would expect to produce a greater volume of runs than in the earlier Women’s match.

But it was not to be a perfect homecoming for Latham, who was out caught off Anton Devcich from the very first ball of the innings, to deal an early blow to the Kings. Stephen Murdoch came in and looked good, stroking a couple of boundaries off Scott Kuggeleijn’s first over before he was also out bowled to have the Kings reduced to 13 for two after two overs.

Skipper Cole McConchie came to the wicket in familiar circumstances but off the back of some great form in the Super Smash thus far, and he looked in great touch early on. McConchie hit a couple of rasping cut shots on the up through point and cover while showing his prowess down the ground as Wagner was taken for 14 in his first over. It allowed Bowes to play anchor, before English import Chris Jordan got his man, having McConchie caught behind for a swift 24 to have Canterbury at 54 for 3 in the sixth over.

With the arrival of Andrew Ellis to the crease to join Bowes, the tempo of the innings kicked into overdrive as the pair put on a century stand from just 58 balls. After initially settling in against the spin tandem of Santner and Nethula who looked to slow the pace of the game down, the pair kept busy running hard between the wickets. Ellis then cut loose, depositing Nethula for six over midwicket to get things into motion.

Wagner was taken for 13 off his second over as Bowes made a timely return to form, bringing his fifty up off 40 balls, and looking in good touch on both sides of the wicket. The 14th over appeared to come as the trigger, with the pair both launching Devcich for sixes over midwicket in an over that conceded 20 runs. Bowes was eventually dismissed by Jordan in the 16th over, but by that time had amassed 67 off 46 balls, with seven fours and one six.

Ellis fell shortly thereafter, caught at the wicket off Santner, but not before making 45 off 30 balls, and looking right at home in the middle order. At 163 for 5 in the 17th over, it was left to Cameron Fletcher and Leo Carter to finish the innings, and they put on a swift 30 runs to end the innings at a competitive 193 for 5.

The Knights’ response started with a bang. Kyle Jamieson continued his whirlwind ride in the Super Smash tournament, as Anton Devcich welcomed him in the first over with three boundaries, before being caught behind by Latham to have the Knights 12 for 1 at the end of the first over. Peter Bocock looked to take on the 6-foot-7 seamer in his second over, but Jamieson’s into the wicket length accounted for him, as he holed out to McConchie at mid-off to have the Knights 27 for 2 in the third over.

Canterbury then sensed a real opening after the third wicket fell when Bowes took a stunning catch on the deep mid-wicket boundary to dismiss Darryl Mitchell. Mitchell looked to go big against left-arm spinner Jeremy Benton in his first over, though Bowes expertly circled the boundary before diving to his right and claiming the catch millimetres from the ground. At that stage the Knights were looking shaky at 42 for 3 after five overs.

Brett Hampton’s introduction however started to turn the tide as he looked to take on the Kings’ attack. He was aggressive against Ed Nuttall and McConchie in a couple of expensive overs, striking well in the arc between long on and mid-wicket. Hampton shared in a 51-run stand with Corey Anderson before Ellis broke through, having Anderson caught in the deep to keep Northern in check at 93 for 4 in the 11th over.

Hampton continued on his way though, bringing up his fifty off 35 balls before another outstanding piece of fielding in the deep put an end to his innings. Hampton took on Ellis again and skied the ball towards long-on where Benton made a sprawling dive forward to hold on to an excellent catch. Santner was caught shortly afterwards, slicing one off McConchie to point to have the match well poised for an exciting finish, with the Knights requiring 48 off the last four overs.

But it was Flynn who provided the difference at the end. After initially being dropped at deep mid-wicket off Ellis, he went on to make the Canterbury bowlers pay, pulling Jamieson for six over square leg before smashing Ellis for a maximum over mid-wicket in the next over. His 13-ball 31 included two sixes and two fours, and by the time he was caught off Ellis, Northern required 14 off nine balls. With five needed off the last over, Nuttall had Jordan caught off the first ball, before Kuggeleijn launched another one over long on to give the Knights another win in the competition.

Grab tickets to our next Double Header against the Central Stags here.