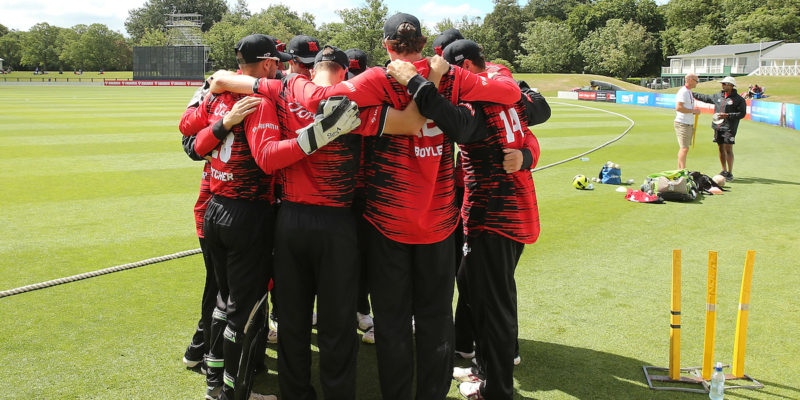 Despite a late fightback from Fletcher, the Canterbury KINGS have fallen short by 17 runs against the Central Stags at Hagley Oval.

Winning the toss and opting to bat, the Stags got off to a poor start, losing openers George Worker and Christian Leopard within the first three overs.

Batting at first drop, wicketkeeper Dane Cleaver hit a quick-fire 81 off just 51 balls to give the innings substance and momentum. He had handy support from captain Tom Bruce (29 off 23) and Josh Clarkson (36 off 25) as the Stags made 181-8.

The KINGS were immediately on the back foot in their reply when Seth Rance trapped Jack Boyle in front for no score in the first over. Three tight overs followed and the Kings found themselves 16-1 after four and already facing a required run-rate above 10.

Stephen Murdoch (32 off 27) eased the scoreboard pressure in the next over, hitting four consecutive boundaries off Ajaz Patel.

Blair Tickner then entered the attack and took three wickets in his first two overs to have the home side reeling at 48-4 in the 8th over.

Cam Fletcher (65* off 37) didn’t give the chase away and he shared a rapid 53-run stand with Henry Shipley (27 off 15) for the 7th wicket that gave the home crowd hope for another grandstand finish.

However, when Shipley became Tickner’s fourth dismissal of the evening the visitors had the four competition points in the bank.

The result lifts the Stags up to 18 points, level on points with the Otago Volts but with a slightly better net run rate. They sit two points above the Auckland ACES, although the Volts and ACES each have a game in hand.

The Wellington Firebirds sit six points clear at the top of the table and are almost certain of a spot in the top three. Which two teams will join them in the finals is less clear with final standings set to go down to the wire and all teams except the Knights in with a chance.

The ACES finish their round-robin with fixtures against the Knights and Firebirds. The Volts and Stags meet in a crucial matchup in Dunedin on Saturday before the Volts finish with the Canterbury KINGS at Hagley Oval.