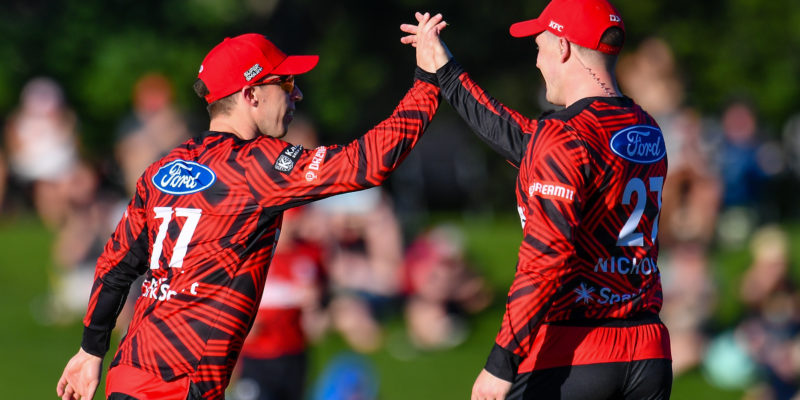 The Canterbury KINGS put on an absolute show for a full house at Hagley Oval on Boxing Day, blitzing the Otago Volts in a 36-run victory, with multiple KINGS standing up and putting quality performances on the park.

Skipper Cole McConchie won the toss and opted to put runs on the board first and was sure pleased with the roaring start openers Chad Bowes and Ken McClure set, scoring at 10’s an over.

Bowes and McClure together scored the highest partnership of the match, putting 75 runs up for the first wicket stand.

Bowes wasted no time, scoring three fours in the opening over off Duffy. McClure then came to the party, hitting back-to-back sixes off McKenzie, giving the sold-out crowd their first chances at crowd grabs. Both not taken.

Kenny! McClure is here to play for @CanterburyCrick at Hagley Oval. Follow play LIVE with @sparknzsport and @TVNZ Duke on a beautiful evening in Christchurch. #SuperSmashNZ pic.twitter.com/VS2MdxzDUW

McClure fell in the 9th over, pumping one to extra cover and ending his sharp innings of 34 off just 27 deliveries. Henry Nicholls joined Bowes at the crease in his 50th T20 appearance for Canterbury.

Chad Bowes brought up a class act 50 off just 32 balls in the 13th over, steering the Canterbury’s run machine into a solid position, before being dismissed caught two balls later.

Nicholls’ 34-run partnership with finisher Matt Henry was vital at the innings death, with Henry racing to a huge 23* runs off just 9 balls, dazzling the home crowd with two enormous maximums hitting the Hagley Oval banks.

The KINGS finished with a respectable 173/6 after their 20 overs, with significant contributions from Bowes, Nicholls, McClure and Henry.

Despite Otago VOLT Hamish Rutherford looking in form, hitting three consecutive fours in the start of the second over and going on to top score with 62 runs off 48 deliveries, KINGS quickly took control of the innings.

Henry Shipley took two wickets inside the first six overs, with the help of Leo Carter taking a stellar catch in the deep, and Shipley himself never losing sight of a sky-high ball and taking it safely to dismiss two top order VOLTS batters.

KINGS bowlers kept the foot on the throat. Despite a short cameo of 22 runs from Nick Kelly, partnerships could not be put together for the VOLTS as the KINGS consistently took wickets and bowled strings of dot balls.

Singles weren’t enough from the Otago VOLTS side, going without a boundary for six overs as the KINGS bowlers continued to dry the VOLTS scoring. Scoreboard pressure continued to build, and the visiting southern side needed 72 runs off the last 5 overs for victory.

The Otago VOLTS found themselves 36-runs short at the conclusion of the 20th over, securing the win for our Canterbury KINGS over our southern rivals. Shipley, Henry, and Astle all took two wickets each, and Nuttall took one.

The KINGS next play at home on the 18th of January taking on the Auckland ACES, and then meet the Northern BRAVE again on the 21st of January. Tickets to the double headers are available online NOW!