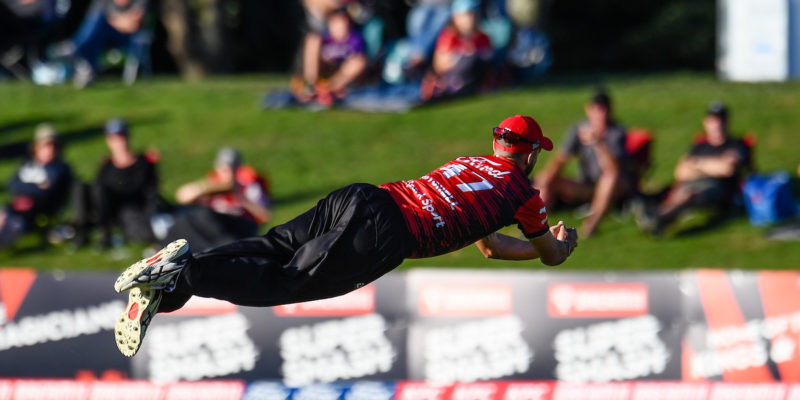 Canterbury made it a Hagley Oval double as they followed up the MAGICIANS’ success with a composed win over the Otago Volts.

The Volts were fighting for mathematical survival after their stalled campaign, while a win would see the Canterbury KINGS qualify in the top three.

Sent in, the Volts got off to a cracking start thanks to star openers Neil Broom (48 off 37) and Hamish Rutherford (23 off 15) who initially looked to have the visitors on course for a hefty total.

But it didn’t go to plan, after KINGS legspinner Todd Astle continued his impressive form and struck back with a couple of big wickets in Broom and Nick Kelly, while Rutherford had fallen to another outstanding diving grab from Daryl Mitchell.

Josh Finnie (26 off 15) impressed with his power and Anaru Kitchen provided 36 off 30, but the Volts fell short of theit ambitions as they set the hosts a chase of 163 under lights.

KINGS opening batsmen Ken McClure and Chad Bowes both made an early impact in response, but after tight work with the ball through the middle from the regular firm of Nathan Smith and Michael Rippon – then Mitch McClenaghan and Kitchen initially keeping the pressure steady – another match seemed destined for a close finish.

Rippon returned for his last in the 16th, but arrived just after KINGS captain Cole McConchie had got his wind up and deposited Kitchen onto the roof of the pavilion.

The KINGS still needed eight per over, but McConchie crucially survived when he was dropped off Smith – one of several skied catches to go begging under the lights on the night – before peeling 10 runs off Smith’s next two deliveries to rub salt in the wound and reduce the chase to a manageable run-a-ball from the last three overs.

From there the KINGS were back in control, McConchie continuing his good season and reaching his unbeaten half century as he hit the winning runs with an over to spare, as the Volts formally dropped out of contention.

Canterbury and Wellington now each have their twin men’s and women’s teams into the Finals. The Central Stags and Northern Knights are the remaining contenders for the last spot in the men’s top three, while the Auckland Hearts have already qualified in the women’s league.