Keep up with the Cantabs – NZ XI (GAME TWO) 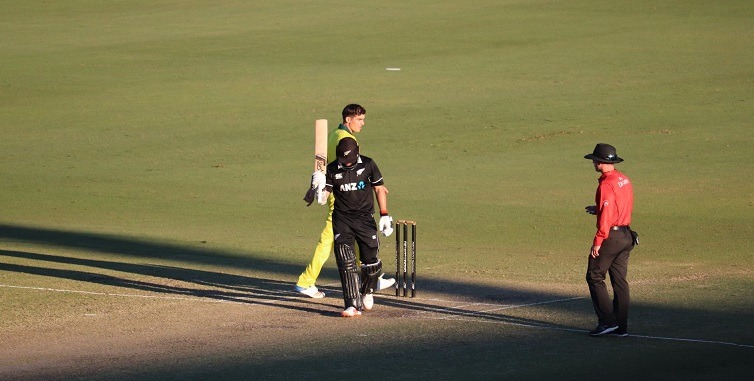 After suffering a narrow one-wicket defeat on Monday, the New Zealand XI bounced back to chase down the Australia XI’s 277-6 for an upset seven-wicket win in game two of the Cricket World Cup warmup series.

Australia welcomed star bowler Mitchell Starc back into the attack, while Canterbury’s Henry Nicholls and Matt Henry sat this one out for the inclusion of Hamish Rutherford and Blair Tickner.

It was a shaky start for the men in yellow with David Warner going for a duck, clipping one to Will Young for a simple catch at cover. Doug Bracewell struck again with the ball in the 10th over, removing fellow Aussie opener Aaron Finch showing the BLACKCAPS selectors he’s raring to go if any late injuries arise.

Usman Khawaja and Glenn Maxwell contributed valuable half-centuries but it was the Former Australian Skipper Steve Smith who was the pick of the Aussie batsman finishing the day on 89* from just 77 balls, leaving 278 for the Kiwis to chase.

The inclusion of Starc back into the pace attack was felt early on for the NZ XI batsman losing Rutherford in the opening over before Central Stags duo George Worker and Will Young combined for a century stand making the chase look relatively easy.

Worker was dismissed by a beautiful Mitch Starc Yorker which found skipper Tom Latham at the crease who was set to improve on his game one 13.  The pair made impressively light work of a target of 278 off the back of a classy 130 to Young.

With captain Tom Latham chiming in with 69 not out off 67 balls, the New Zealanders got home in a surprisingly one-sided contest with 10 balls to spare, with game three back at Allan Border Field on Friday.