Keep up with the Cantabs – Lea Tahuhu 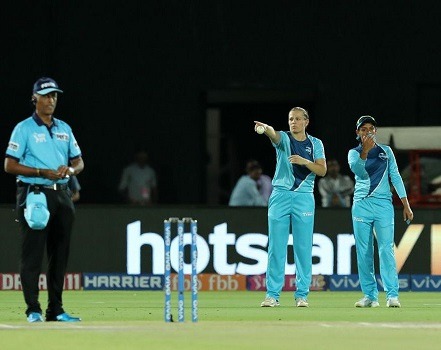 For those who haven’t been across the media, Canterbury and WHITE FERNS pace Bowler Lea Tahuhu was one of four New Zealand players among the Women’s T20 Challenge that recently wrapped up in India.

Playing alongside WHITE FERN Sophie Devine in the final, the Supernovas won the tri-series tournament in front of an atmospheric crowd of 13,000. Tahuhu was the pick of the bowlers on the day picking up 2-21 from her four overs and was at the non-striker’s end as team-mate Radha Yadav hit the winning runs off the bowling of fellow countrywoman Amelia Kerr.

So you’ve dislocated your shoulder punching the air? Interesting way to get injured – how’s the rehab looking??

Yea a bit of celebration gone wrong. After running through for the winning runs and punching the air I dislocated my shoulder. Really unlucky way to get injured! Rehab wise it could be a long winter in the gym but the positive is we don’t have a tour over winter so plenty of time to get things right.

A roller coaster of emotions last night.. elation to get the win! Great striking from skip @imharmanpreet_kaur. To utter devastation of a freak accident dislocating my shoulder punching the air in celebration??‍♀️ Thank you for all the kind words and well wishes. Onto rehablife for me!

How did you find your way into the Supernovas? Can you talk us through the process?

At the moment the set up for the T20 women’s challenge is the BCCI control the players that are invited and organise the teams. I was really happy to play with the supernovas alongside internationals I’ve been lucky enough to play with before in other competitions.

What was it like having to play a different role and having a different coach/captain that you’ve never previously worked with?

As a player you’re always wanting to perform your favoured role but at the end of the day the most important thing is what is right for the team and the conditions. Getting to play under different coaches and captains is always an enjoyable experience. You always learn something new from how different people think about the game and go about playing it and the more you can pick up the better.

Other than the fact it was 3 games, how did the competition compare to the BBL or Super Smash?

I think the major difference was probably the crowds that came in for the games especially the final. There were 13000 people in the stadium and more outside. It was an incredible atmosphere to play in.

Winning the final must have been an amazing moment – what was it like being out in the middle when the winning runs were hit on the last ball?

It was an incredible moment, I’ve been in a few games over the years where I’ve been batting at the end in close games but nothing like the atmosphere that was at the ground with this one. The crowd was very loud and the last over felt like it took 10 minutes! It’s the first time I’ve won a title in an overseas competition so it’s something really special that I’ll remember for a long time.

Other than cricket, what have you enjoyed the most about your time in India?

India is a really special country to visit. The people are incredibly welcoming, and the culture is so different to New Zealand. We were lucky enough to have a few days to do some sightseeing and visit Amber Fort and the markets in the Pink city. Going shopping in the street markets in India is always a life experience!

Spent the day exploring the beautiful city of Jaipur, especially Amber Fort. A big thank you to @januprivatetours for taking us out and telling us all about this amazing place. #lucky #grateful #tourlife #wipl