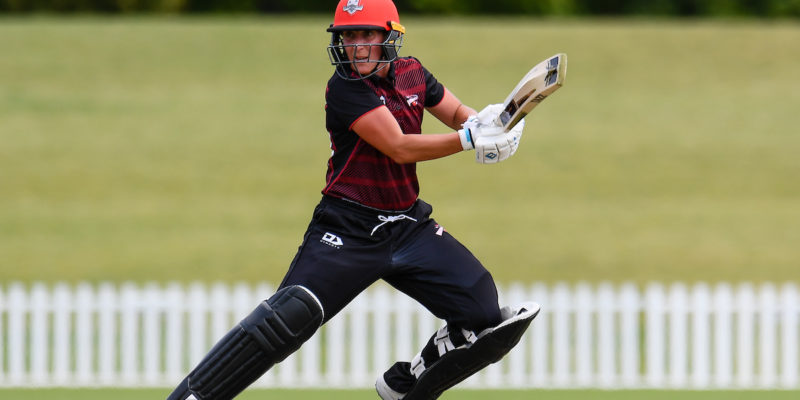 The Hallyburton Johnstone Shield has a new frontrunner after the Canterbury Magicians won the first of two top-of-the-table clashes in Rangiora, today – and with enough vavoom to take a bonus point.

Fresh off winning New Zealand’s Dream11 Super Smash, the Magicians’ big 78-run win over the Central Hinds broke the deadlock at the top of the table, Kate Ebrahim carrying her bat through the hosts’ innings with an unbeaten 102* off 150 balls.

Just a week after her recall to the WHITE FERNS T20 side, it was the veteran Ebrahim’s fifth Domestic List A century and third for the Magicians (with her first two tons having been for opponents the Hinds) in a winning start for new Canterbury captain Gabby Sullivan.

Meanwhile in Wellington, the third-placed Auckland Hearts – the women’s defending one-day champions – took a 110-run win off Wellington Blaze to close the gap on the Hinds, joining them on 24 points.

The Hearts’ bonus point victory means pressure doubles on the Hinds tomorrow (Sunday) to bounce back quickly against the Magicians, with just two rounds remaining following tomorrow’s Round Eight and only the top two sides to progress to the Final.

In the remaining fixture today in Hamilton, last season’s beaten Grand Finalists Northern Districts took a comfortable 72-run win over the out of contention Otago Sparks to keep their slim playoff hopes alive.