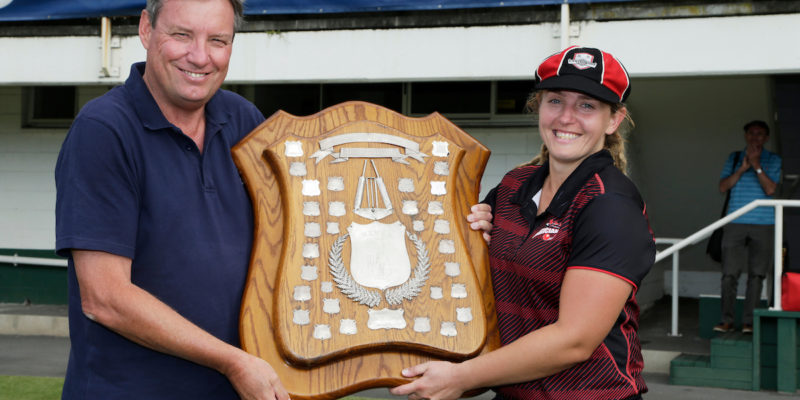 What’s more, Canterbury’s flagship men’s and women’s teams have won both of New Zealand’s one-day national crowns this season – and today became the first Major Association to win four of the five NZC Domestic titles on offer, after Canterbury’s unbeaten men’s first-class team locked up the Plunket Shield with two rounds to spare.

The Plunket men secured a comfortable victory over the Central Stags in Rangiora with more than a day in hand, while nearest rival Northern Districts picked up just three of a possible 20 points as their Bay Oval match with the Wellington Firebirds petered out to a draw.

Unbeaten Auckland’s miserable run with the weather gods this summer meanwhile continued in Invercargill where no play was possible on the final day and the drawn match was called off early.

The Canterbury men’s nine-wicket win swept them clear to 98 points on the championship table – 47 points ahead of ND. With a maximum of 40 points available for each team from the remaining two rounds, it meant Canterbury had lifted the title with 25 per cent of the season still to be played, with an impressive five wins from six rounds (the other result a draw).

The only trophy not to sit in the Canterbury cabinet this summer, the men’s Dream11 Super Smash (T20), was retained by the Wellington Firebirds, Canterbury having finished runners up in the February 2021 Grand Final.

At Auckland’s Eden Park Outer Oval, the Canterbury Magicians turned in a similarly dominant display to the men in the Plunket Shield, beating defending champions the Auckland Hearts by eight wickets after Mackay and Amy Satterthwaite joined forces in a new Magicians record partnership for any wicket against the Hearts of 166 runs (also the third highest partnership for any wicket by any team this season).

The Magicians had been chasing the Hearts’ 185 all out – a middling total that had been propped up by a fighting Katie Perkins half century. The Aucklanders had come under pressure from the regular loss of wickets, after having elected to bat first – a decision Mackay suggested she would have made herself.

Mackay then batted throughout the chase, narrowly missing out on extending her Canterbury record haul of 13 centuries to 14 after she was left unbeaten on 94 not out (112 balls).

Instead, it was over to the team’s leading run-scorer of the season, Kate Ebrahim, to strike the winning boundary – having enjoyed watching the majority of the chase from the sidelines after Satterthwaite negotiated the challenging Hearts attack for a class and well paced 73 off 80 balls.

Earlier, Satterthwaite had turned in 4-27 with the ball, and now became one of the few women in the world to reach 9000 List A (one day) runs when she reached 49*.

“Amy took all the pressure off me in the middle, she was outstanding,” said Mackay.

“The Auckland Hearts had a score on the board that could have been defendable, although they probably needed everything to go their way.

“We did lose an early wicket, but then to have someone of the class of Amy to come out and steady the ship, as they say – she was brilliant in the way she did that.”

The Magicians’ first one-day title since 2017 was a poignant one for both Satterthwaite and Ebrahim who had both returned to the team this season after taking time out for the birth of their respective daughters who watched their mums from the sidelines.

“It was a special win today,” said Ebrahim who had previously won the one-day crown with both the Central Hinds (2010) and the Magicians (2017).

“To have won the two titles this season, that’s a massive achievement from this group considering our performances last year [when the team finished last in the T20s and a distant third in the one-day format]. That in itself is a huge win for us.”

The only woman to score two centuries in the season, top run scorer Ebrahim conceded she had been uncertain how she would go this summer after a year away from cricket.

“I didn’t know how I would go when I came back, but I stuck to what I do – train hard, do the hard graft in the winter behind the scenes, and when it comes to game time, it pays off.”

Satterthwaite said it meant a lot to her personally “to have a child and come back and still play a meaningful role in the team’s success.

The match was the finale in the women’s Domestic season while the Plunket Shield has two rounds remaining to sort out the minor placegetters, and will be completed on April 6. Canterbury is due to play their final match away in Napier to the Stags whose own hopes of claiming the title vaporised in the heavy defeat, in which Canterbury spinner Theo van Woerkom claimed a career best and late blooming paceman Sean Davey claimed his maiden five-wicket bag.

Canterbury last lifted the Plunket Shield in 2016/17, when current head coach Peter Fulton played the last first-class match of his career for the team.