Here come the red and blacks! 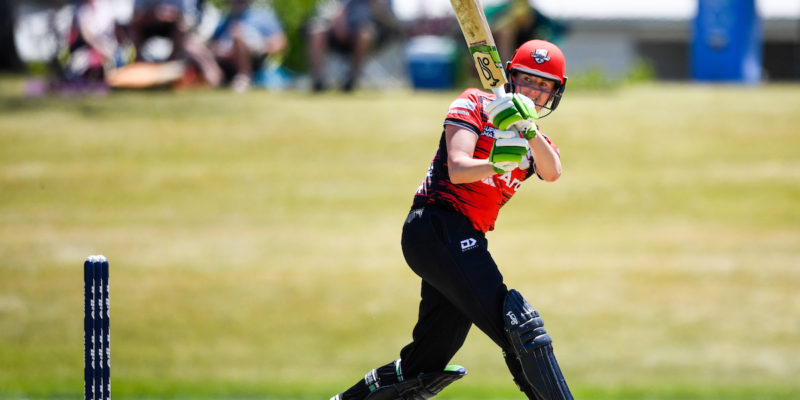 Batting first after winning the toss, first-up hosts the Otago Sparks had another tough day at the office in Alexandra, mustering a total of 112 all out after Bella James was run out for their top score of 24 off the last ball of the innings.

WHITE FERN Lea Tahuhu had helped herself to 3-11 while 22-year-old Gabby Sullivan continued to impress with 3-19.

Oamaru youngster Molly Loe picked up one of the best wickets of her fledgling career when she got the Sparks off to an exciting start in reply, trapping Canterbury legend Frankie Mackay plumb for a diamond duck.

It was the 20-year-old’s maiden wicket in T20 cricket, but it would prove just one of two in an eight-wicket loss for the home side after Nat Cox and Amy Satterthwaite asserted their authority in a 74-stand for the second wicket.

After Cox’s departure on 29, Canterbury cantered home in the 16th courtesy of WHITE FERN Satterthwaite’s unbeaten half century (56* off 40 balls) and Kate Ebrahim’s 22*.

The Volts took on the Canterbury KINGS looking to back up their ground-record victory on the same ground 24 hours earlier, but they were in for a tough ride this time around.

The KINGS made a great start with the bat after winning the toss, Ken McClure – the red-hot batsman playing his first T20 in four years – with a point to prove, and reaching a quick career best 40 off just 26 balls.

He piled on 77 for the first wicket in partnership with Chad Bowes who top-scored with 72 before he was unlucky enough to play on in the 16th over.

After a fast finish from Cam Fletcher (35* off 18), Canterbury set the Volts a 186-chase, but BLACKCAP Matt Henry  broke their dangerous opening combo in his first over with Hamish Rutherford stopped on just 13.

Neil Broom loomed as the key threat as he raced to 41 off just 28 balls, but was another crucial wicket when the match was in the balance at 73/4 in the 11th.

The pace of Ed Nuttall (3-18) then saw the visitors get firmly on top with a string of breakthroughs, the Volts bundled out 61 runs short as Henry (3-25) wrapped it up in the penultimate over.