Henry ruled out of Plunket Shield with broken thumb 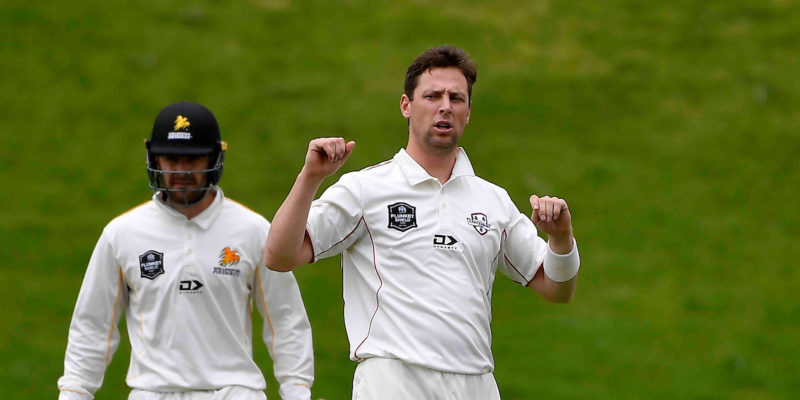 Canterbury have been dealt another injury blow with BLACKCAPS seamer Matt Henry ruled out of tomorrow’s Plunket Shield match after suffering a broken thumb at training yesterday.

Canterbury physio Tim Dovbysh said he was optimistic Henry would return in four to six weeks.

“Matt was unfortunately struck on the tip of the right thumb while batting in the nets,” he said.

“Matt got an X-ray immediately after training which confirmed the fracture.

“He’ll need a temporary rest from bowling but will still add value to the team at trainings and will start bowling when able.”

Matt Henry will join fellow BLACKCAP Henry Nicholls on the side lines who’s also been ruled out due to injury.

Henry’s misfortune provides an opportunity for newly contracted right-hand batsman Tyler Lortan who has been added to the squad.

The South African born 28-year old is the only change to the side that defeated the Firebirds by 8-wickets in their season opener last week.

Canterbury coach Peter Fulton said it was Lortan’s hard work that has earnt him a call up.

“Lortan has been training really well and he’s had an impressive preseason,” Fulton said.

“With a new wicket at Hagley Oval and some bad weather around, Lortan gives us the option to potentially play an extra batsman.”

After an 8-wicket defeat at the Basin Reserve, Fulton knows the Firebirds will be a tougher beast this week.

“It will be a good challenge for us to test ourselves and try and put our stamp on the game,” he added.

“If we can get on top early in day one, that should hold us in good stead.”

Play gets underway from 10.30am at Hagley Oval tomorrow. With the embankment closed due to construction, the Hadlee Pavilion will be open to the public for free.