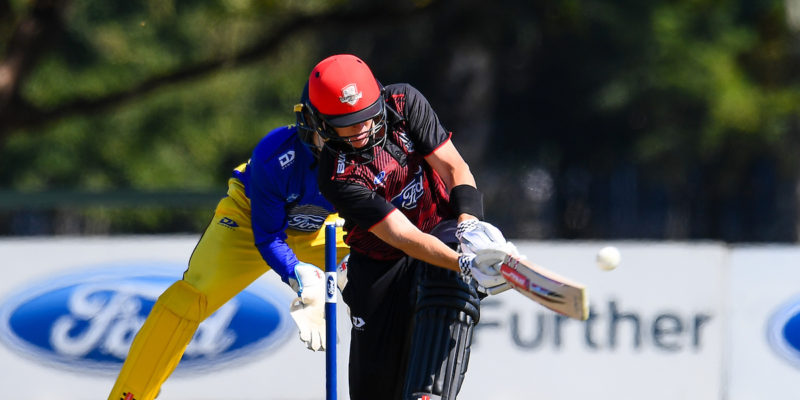 The stage was set. Canterbury were just one win away from a shot at some silverware in what was soon to be classed as the Ford Trophy’s most closely contested Elimination Finals of all time.

Hamish Rutherford, back from New Zealand A to play his 50th List A match in Volts colours, and Mitch Renwick made a positive start on a cloud-covered Christchurch morning, putting on 45 for the opening wicket inside 6.2 overs.

The pair had already found the fence eight times, however, Matt Henry struck a big blow in his opening spell.

WICKET | The middle peg goes flying and Matt Henry has the important wicket of Hamish Rutherford – gone for 24.

Neil Broom opened his account with an edgy boundary off Henry the very next ball, picking up where Rutherford had left off as he embarked on the second-wicket stand with anchorman Renwick.

The pair combined for a brisk 80-run second-wicket stand that had the Volts on course for a big total.

However, on just 24, Broom attempted a fateful scoop against Canterbury captain Andrew Ellis that saw the second wicket down at 125/2, just after the 20-over mark: the second big gun was gone.

Renwick’s best List A score heading into the match was 61, but he found the perfect time to better it – going past the milestone a couple of overs later with Nick Kelly now in support.

Kelly took the Volts past the 150 just after the halfway mark of the innings, courtesy of four overthrows off Henry’s seventh. How important those overthrows would prove.

Ed Nuttall was about to swoop in and claim both batsmen off consecutive overs, giving Canterbury a chance to stem the runs.

First Nuttall had Kelly caught by Todd Astle at fine leg, Kelly having tried to hook the Canterbury quick after a run-a-ball 22.

On 75 (93 balls), Renwick followed in the 30th over, looking for his ninth boundary but not quite getting the timing on an uppish delivery.

The Canterbury fightback continued when new man Josh Finnie departed just two balls later: trapped second ball by Todd Astle to have the Volts 171 for five, and again with two new men at the crease.

After Astle struck again to remove Nathan Smith, Dean Foxcroft and Anaru Kitchen made a careful start to their seventh-wicket stand before Kitchen, in his 100th List A game, put the Volts’ 200 on the board in the 40th.

After hitting the second six of the innings, Kitchen kept ticking over the strike and brought up a 50 in his milestone game in the 45th over, off just 41 balls.

His rearguard 72-stand with Foxcroft had kept the Volts on track for a big total, but he would be out the very next over as Matt Henry came back into the attack and collected his second wicket off his first ball.

Will Williams accounted for Michael Rippon at the end of the next over to have the Volts wobbling at the death at 263 for eight, but the dangerous Foxcroft remained firm – crucially allowing the visitors to attack the last three overs.

Foxcroft carted a six off Williams in the 49th, then reached an unbeaten half-century in the 50th over, slashing 10 runs from it, off Ellis.

After three half-centuries and a handful of partnerships, the Volts had posted 294 for nine, Foxcroft heading in unbeaten on 55*.

By contrast, Canterbury made a more measured start with the bat, Jack Boyle putting the Canterbury 50 on the board with the first six of the innings at the end of the 13th over.

By then the hosts were already one down.

Fellow opener Chad Bowes had scored an unbeaten century in the previous game, but this time he would reach just 11 before Volts captain Jacob Duffy had him caught – Michael Rae taking an excellent, running grab on the boundary behind the wicket at 21 for one.

First drop Stephen Murdoch joined Boyle to regroup, and put on a 50-stand for the second wicket by the 17th.

That stand grew to 111 runs, both men raising the bat for respective half centuries.

Boyle got there first, off 61 balls, followed by Murdoch (69 balls) after the pair had frustrated the Volts attack for almost an hour and a half, helping themselves to runs against the spin attack.

The reintroduction of opening paceman Nathan Smith broke the spell, however, Murdoch caught in the 27th at 132 for two.

Evenly poised at Hagley Oval with Canterbury 146/2 after 29 overs.

152 for two at the 30-over mark, the traditional maths suggested Canterbury was well on track, with Boyle looking ominous.

Michael Rippon soon had his first wicket, however, removing Ken McClure cheaply to bring Todd Astle to the crease at 155 for three.

With just under 100 runs required at an RPO hovering around eight per over, Astle was caught off Foxcroft to have Canterbury 197 for four, a dozen overs remaining.

Anchorman Boyle had reached 83 by now, joined by his captain as he hunted for his third Ford Trophy century in the red and black.

With 11 runs off Foxcroft’s 40th, then eight off Rae for good measure, Ellis and the youthful Boyle kept the runs flowing at a crucial point in the innings.

Boyle had reached 94* when Rae, in his last over, put a stop to their quick 36-run stand for the fifth wicket.

Ellis had looked to give himself plenty of width, stepping back across only to ladle an edge to keeper Renwick who did well to scramble and leap across to pluck it out of the air.

Renwick takes a stunner to dismiss Ellis and the visitors have their 5th.

Boyle still anchoring the innings on 94*

New batsman Cameron Fletcher got off the mark with a six off Rippon’s last over. Now Canterbury needed their last 52 runs off 35 balls: doable.

With an aerial boundary off Duffy, Boyle reached three figures in the 45th over. It had been a superbly constructed knock (7 x 4, 1 x 6, in just over three hours) that brought up the Canterbury 250 with the same stroke.

Century for Jack Boyle! Brilliant innings by our opener.

The job still wasn’t done, however, and the Volts were about to fight back big-time with the ball – claiming Fletcher and Henry Shipley in quick succession.

Now Canterbury needed 25 off 16, three wickets in hand – but crucially with Boyle still in charge.

Down to the last two overs: 18 needed. The Elimination Final was now officially in nailbiter territory, but Matt Henry slapped a four perilously close to Renwick’s outstretched glove to somewhat ease the pressure.

The pair would pick seven runs off the first four balls of Duffy’s final over (the 49th), but the Volts captain dotted down against Boyle – and then, finally, removed the stubborn opener with his last delivery of the game.

Boyle had departed on 119 (131 balls), leaving Henry and Williams to find the last 11 runs off the exacting Nathan Smith’s 50th.

Williams scrambled two off the first ball, and the second – before Smith struck a massive blow, bowling him next ball to have Canterbury nine down.

Now number 11 Ed Nuttall was on strike with seven required off three.

Smith was on the money – and meanwhile, an eager Henry had taken off for a suicide single that was never there. Stranded by a country mile.

Smith didn’t panic. He coolly collected the ball off the pitch and ran to the non-striker’s stumps with plenty of time to run him out for a six-run victory with two balls to spare.

The Volts were off to the Grand Final for the second time in as many seasons.