Hagley to host 3 Internationals this summer 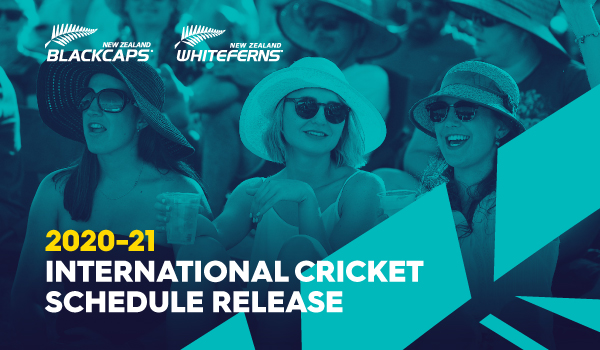 After concerns over the effects of the COVID-19 pandemic on the summer schedule, sports fans can look forward to the arrival of the West Indies and Pakistan men’s sides in November, followed by the Australia men’s’ team in February, and the Bangladesh men’s side in March.

Included in the season of international cricket are four Tests, two against the West Indies and then two against Pakistan, the first of which will be a Boxing Day Test at Tauranga’s Bay Oval.

The BLACKCAPS are currently in fourth place on the inaugural Test Match Championship ladder and a strong performance in each series will greatly enhance their chances of qualifying for the final, scheduled for next June.

The first Test against Pakistan at Bay Oval will be the eighth Boxing Day Test in New Zealand and the first since the BLACKCAPS beat Sri Lanka at Hagley Oval in 2018. Wellington (five Tests) and Christchurch have hosted the others.

The WHITE FERNS can also look forward to an exciting summer of international cricket, with the England women’s side confirmed to visit in February and March, and discussions ongoing regarding a visit from the Australia women.

While the Government has so far granted approval for the first two incoming teams, New Zealand Cricket chief executive David White was confident the other inbound tours would receive the green light.

Pop these dates in your diary! 🏏☀️ #CricketNation

“I’m thrilled to be making this announcement today, given the uncertainty and difficulties over the past six or seven months,” he said.

“We owe a huge debt of gratitude to the New Zealand government for helping us navigate this complex process, as we do to our commercial partners and especially Spark Sport and TVNZ, for their patience and understanding.

“Hosting these tours is incredibly important to us for two reasons: international cricket brings in revenue that funds the entire game of cricket in New Zealand and, also, it’s crucial that we look after the fans of the game and sport in general, especially during these difficult times.”

Mr White said NZC was aware of the challenging circumstances in which many New Zealanders had found themselves in the wake of the COVID-19 crisis and would be cutting the price of a GA adult ticket by almost half, to acknowledge this.

“It might sound counter-intuitive to be lowering ticket prices at a time of great additional cost and expense to the game, but we think it’s the right thing to do”.

Mr White said he was extremely grateful to Cricket Australia for seeing fit to send its men’s T20 side to New Zealand at a time when its international calendar was so congested.

“We’ve worked very closely with Cricket Australia in what is, really, a unique set of circumstances – and we can’t speak highly enough of their commitment to the global game.

“The same goes for the West Indies, Pakistan, Bangladesh and England – right across the board in cricket there’s been a real spirit of cooperation.”

While no international side would be in New Zealand through the bulk of January and earlyFebruary, Mr White said Kiwis could still look forward to top cricket.

“One of the silver linings is that our Super Smash competition, which will be played in that window, will now be boosted by the presence of BLACKCAPS and WHITE FERNS.

“It’s going to be the best Super Smash yet, I’m confident of that.”

Head of Spark Sport, Jeff Latch said his organisation was delighted with the schedule and was looking forward to broadcasting all the WHITE FERNS and BLACKCAPS fixtures, and the vast majority of the Super Smash competition. “We are incredibly excited to be in a position to let our customers know of the packed summer of cricket schedule on Spark Sport with selected matches on TVNZ.,” said Mr Latch.

“It has been a really collaborative approach to get to the position of announcing the fixtures and I believe in the lead-up to summer, New Zealand Cricket and Spark Sport are well positioned to pull off a fairly impressive line-up in a year that has thrown us many curve balls. “Today should also be a timely reminder that the cricket will be coming to New Zealanders differently this year with Spark Sport streaming all matches.

“Fans who want to get amongst the action should start getting their streaming set-up sorted and be match fit by the time November 27 rolls around.

“I’d encourage them to visit help.sparksport.co.nz for self-help resources or to chat to our team and not to leave it until the last minute to get sorted.”

“It has been decades since cricket of this calibre was free-to-air on television in New Zealand and we know that New Zealanders will love this addition to our summer schedule.”

The full International Schedule can be found here.