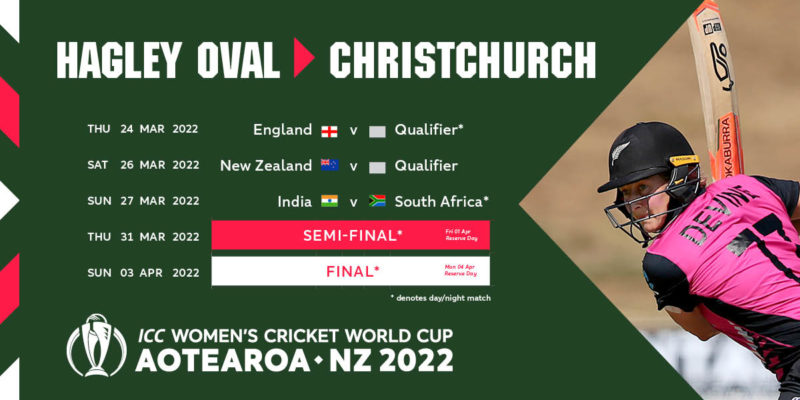 A final under lights at Hagley Oval and an opening match at Tauranga’s Bay Oval are two of the highlights of a 31-match schedule announced today for ICC Women’s Cricket World Cup 2022.

The pinnacle event for women’s cricket will see 31 matches played across 31 action-packed days between 4 March and 3 April, 2022 – the first global women’s cricket event to be played since the Women’s T20 World Cup in Australia back in March. The tournament was postponed from its original window in February-March 2021 with the same six host cities and venues retained for 2022.

Highlights of the match schedule announced today include:

• A bumper opening match in Tauranga featuring the WHITE FERNS and a qualifier on Friday, 4 March. Tauranga also hosts the rematch of the 2017 Women’s Cricket World Cup final at Lord’s with England up against India on Wednesday, 16 March.

• Hamilton’s Seddon Park will host seven pool matches, with staunch rivals Australia and England kicking off the city’s matches. India and South Africa will both take on the host nation’s WHITE FERNS in Hamilton.

• The iconic Basin Reserve will host a Trans-Tasman showdown between Australia and New Zealand on Sunday, 13 March, as well as five other pool matches and the first semi-final of the tournament.

• A massive double-header weekend in Auckland sees India taking on Australia on Saturday, 19 March, before the WHITE FERNS face England the following day.

• Christchurch to host the final on 3 April under lights at Hagley Oval on the back of three pool matches and a semi-final.

The much-anticipated Hagley Oval lights were switched on for the first time by Deputy Prime Minister, Hon. Grant Robertson at the announcement, with key Canterbury Cricket Trust, Canterbury Cricket Association and Christchurch city representatives in attendance.

Satterthwaite said: “As a born-and-bred Cantabrian, it’s fantastic to see the Hagley Oval lights up and running. To play in a World Cup at our own stomping ground here in Christchurch, under lights, would be a real career highlight.

“It was hard to watch the T20 Women’s Cricket World Cup from the sidelines back in March (after giving birth in January) so seeing the match schedule all locked in for the ODI World Cup here in 2022 gives both myself and the rest of the team a target to strive for as we prepare over the next 16 months.”

Sports fans across all six host cities will get a taste of the WHITE FERNS action with key match-ups taking place in each city.

The ICC Women’s Cricket World Cup 2022 will be the first of two major cricket tournaments across the globe in 2022 – the other being the Commonwealth Games in England.

Prize money for the showpiece of women’s international cricket will total NZD$5.5million, and all matches will be broadcast live to a huge global audience.

ICC CEO, Manu Sawhney said: “The ICC has made a long-term commitment to elevating women’s cricket as part of our strategy to grow and develop the global game.

“We want to build a sustainable foundation for women’s cricket. It is about building a product that fans want to watch, that kids want to take up, that sponsors and broadcasters want to be part of. This schedule takes the world’s best cricketers across New Zealand and can help inspire a generation of girls and boys to take up the game.

“We are extremely proud of the significant progress we have made in increasing prize money for ICC events over the last few years, with the ICC Women’s Cricket World Cup 2022 in New Zealand having $NZD5.5 million dollars available in prize money, an increase of almost 60% on 2017 and more than 1000% compared to 2013.”

With the match schedule now locked in, ICC Women’s Cricket World Cup CEO Andrea Nelson is excited to see the country get behind the event.

“Our team is proud to be delivering a tournament where Kiwis across the whole country, in each of our six host cities, can really get involved in what is a truly special event. We can’t wait to see the excitement build around New Zealand as we prepare to roll out the welcome mat for the rest of the world.

“Major events like this one are all about creating a genuine legacy for the sport and we are proud to say our tournament was the catalyst for the installation of the Hagley Oval lights. I’d like to thank the New Zealand Government and the Canterbury Cricket Trust for making that happen.”

New Zealand, Australia, England, South Africa and India have qualified for the World Cup. The three remaining teams will emerge from the ICC qualifying tournament which is confirmed to take place 26 June – 10 July 2021 in Sri Lanka.

The eight-team round robin format will see all teams play each other, with the top four teams qualifying for semi-finals.