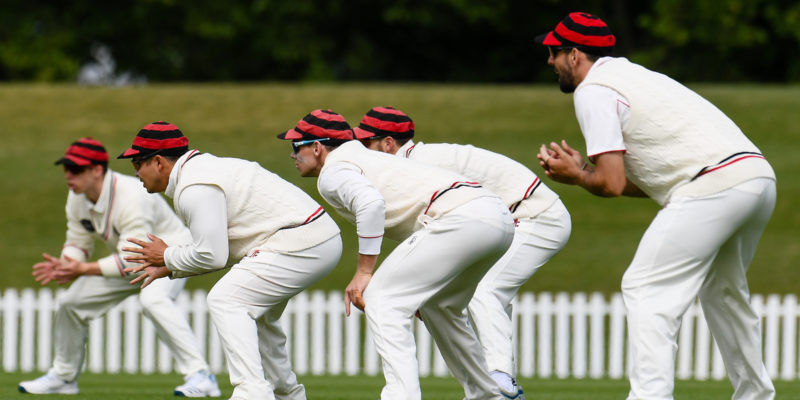 Wellington Firebirds allrounder Jamie Gibson produced a bittersweet unbeaten maiden century during the final stanza of an innings defeat in Christchurch as Canterbury netted their second straight victory against the side.

The well controlled victory, by an innings and 19 runs, also pushed Canterbury to the head of the Plunket Shield table after the first two rounds, nudging them ahead of the only other unbeaten side, the Auckland Aces.

With two wins in as many weeks, Canterbury move to the top of the Plunket Shield table on 36 points! 📸 = @photosportnz #WeAreCanterbury #CricketNation #PlunketShield

After helping set up the win with his century on the previous day, allrounder Daryl Mitchell claimed the winning wicket, leaving Gibson stranded on 116 not out after an almost five-hour epic for his maiden ton.

Canterbury now remains at home but transfers to Rangiora to host Northern Districts next week, while the Firebirds head back to the Basin Reserve looking to bounce back against the Otago Volts.

A 154-run partnership for the sixth wicket between twin centurions Daryl Mitchell (103 off 243 balls; above, right) and Cam Fletcher (100 not out off 190) was the highlight of a productive morning that saw the hosts declare their first innings at a solid 410/6.

The two former Northern Districts teammates ensured Canterbury netted the maximum eight bonus points, but more importantly there were now just over five sessions left to push for an outright.

The proverbially tricky period before lunch did not go well for the Firebirds after Ed Nuttall zeroed in with his first ball on a tentative Tom Blundell, who was caught by Mitchell at 6/1.

After lunch the Firebirds needed to find a further 286 runs to make Canterbury bat again, but it was a mixed middle session, heading into tea at 103 for five with Ravindra, Fletcher (33), Bracewell and Finn Allen all joining Blundell back in the sheds.

Now Canterbury needed just five more wickets while the Firebirds needed to conjure up another 192 runs with Devon Conway one shy of his half century as the teams headed in.

Unfortunately for the Firebirds Conway would fall in the penultimate over of the day, Tom Latham snaffling a sharp one-handed catch off Will Williams (4-48 overnight) just as the class Wellingtonian stood poised on 94 for a potential third century in one day’s play.

Drizzle kept the covers on for the first couple of hours, but with revised session times Leo Carter stayed composed to soon reach his half century in partnership with Daryl Mitchell.

Mitchell was still there unbeaten on 81* when play was called off for bad light that afternoon.

The bumpy start to the defence continued for the Wellington Firebirds at the hands of a red and black pace machine.

Coming off a drubbing against the same opponent at the Basin, this week the two adversaries are meeting on Canterbury’s home turf – but it was déja vu for the Firebirds who again hit turbulence early.

Sent in again by Cole McConchie, this time they were rolled for just 115 in 44.3 overs.

Opportunity knocked for Fraser Sheat. He had come into the home side’s XI after Matt Henry broke his thumb in training ahead of the game, and walked off with his maiden five-wicket bag.

Sheat’s 5-25 off 12.3 overs (two maidens) kept the squeeze on the Firebirds after quick Ed Nuttall had knocked off the top early.

The quality top order of Rachin Ravindra, Tom Blundell and Devon Conway were all back in a sober pavilion at 45/3 and Conway would again top-score with a meagre 27.

Sheat, Nuttall and Will Williams collectively conspired to dismiss four batsmen for no score, the Firebirds gone for just 115 before tea.

A total of 14 wickets would ultimately fall for the day after Ollie Newton (2-27) and Iain McPeake (2-25) extracted some revenge on behalf of the capital before stumps, but Canterbury will begin day two already in the lead to the tune of 31 runs, with six wickets in hand as they look to press on.